In 2009 while recovering from her double mastectomy, Krystal Barter founded the charity, Pink Hope, a community dedicated to inspiring, supporting and informing women at high risk of breast and ovarian cancer. An experienced and passionate speaker, Krystal has featured on 60 Minutes, Today Show, Madison, In Style, Harpers Bazaar, A Current Affair, The Morning Show, Sun Herald, Cleo, Cosmo and SBS Insight, to name a few!

In 2012 she was a finalist for the Young Australian of the Year and NSW Woman of the Year, 2012 Finalist for In-style Audi Women of Style Awards, 2012 Madison Inspirational Woman, 2011 Harpers Bazaar Woman of Influence and 2010 Warringah Young Citizen of the Year. The Lucky One is Krystal's first book. 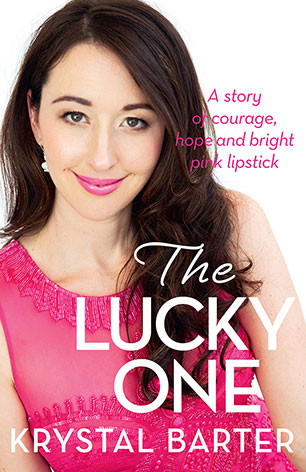 The inspiring story of how a young woman defied a family cancer curse to save herself and offer the gift of hope to thousands of other women.