... and Australia has gone to hell in a handbasket 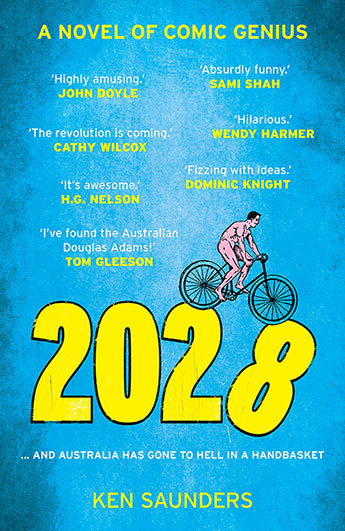 Move over Shaun Micallef ... a work of comic genius that takes the mickey out of anything and everything to do with Australian politics.

2028. Prime Minister Fitzwilliams' instincts tell him it's time to call a snap election. His cabinet team is adequate (just), the howling protests of the doctors after the GP changes has finally died down and, best of all, the Australian Greens are in receivership. So what could possibly go wrong?

The PM is prepared for everything until he finds himself facing what he least expected - an actual opposition. How do you deal with a party that doesn't play by the rules, protests in the nude, sends mail by carrier pigeon and has a list of candidates all called Ned Ludd?

Welcome to the Australia of 2028 where parking meters double as poker machines, radio shock jocks have been automated, the Communist Party of China has turned itself into a multinational corporation and ASIO's glory days are so far over that it's resorting to surveillance of a Charles Dickens reading group.

Outrageous, sharp and wickedly funny, 2028 takes us into the near future where the not very good ideas around today have become ten years worse.
More books by this author

Ken Saunders has lived in Canada, New Zealand and Australia. He has won several Australian and Canadian short-story prizes. He lives in Sydney with his wife Laurie, his daughter having scarpered off to Montreal where the rents are much cheaper. His cat, Cassandra, died last year, so needs no mention here. This is his first novel.