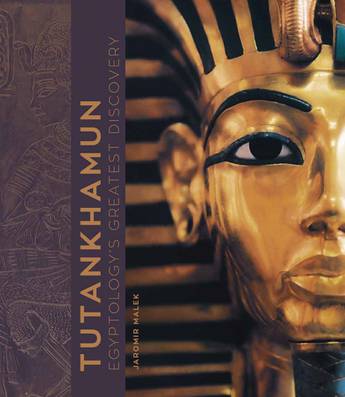 The discovery of Tutankhamun's tomb still remains the greatest discovery in the history of Egyptology. Tutankhamun is full of fascinating insights into the study of the lost civilisation of Egypt, as well as the excavation by Howard Carter almost a century ago.

Tutankhamun puts the boy king's short life into context by describing and explaining the complexities of life in Ancient Egypt. Covering the work of earlier Egyptologists, it details the actual discovery and original expedition, drawing on the personal archives of Howard Carter himself.

On 26 November 1922, Howard Carter and Lord Carnarvon discovered the tomb of Tutankhamun. The world was entranced. Never before had a tomb been found in such a perfect condition, with all the richness of its contents still intact. The stories that have since grown up around the discovery of the tomb and of the boy king who lay undisturbed for over 3,000 years have become legendary and continue to fire imaginations around the world. This book tells those stories, and uncovers the reality behind them.
More books by this author

Jaromir Malek is an Egyptologist and former Keeper of the Archives at the Griffith Institute at the Ashmolean Museum in Oxford, England. He has written a number of books including The Treasures of Ancient Egypt.

Category: Archaeology
ISBN: 9780233005485
Table Of Contents: Introduction • Ancient Egypt: The Land and the People • The Pharaoh • King Akhenaten and the Amarna Period • The Re-awakening of Interest in Ancient Egypt in the West • Jean-Francois Champollion and the Decipherment of Hieroglyphs • Rediscovering Monuments in Ancient Egypt • Early Photography in Egypt • C & C: Carter and Carnarvon • Back in the Valley • The Antechamber • The Tomb • The Excavators • Recording the Contents of Tutankhamun's Tomb • Harry Burton • Opening the Burial Chamber • The Sarcophagus and Coffins • The King's Mummy • The Treasury • The Annexe • The Contents of the Tomb • Safeguarding Tutankhamun's Afterlife • Maintaining Tutankhamun's Royal Status in the Afterlife • Mementoes of This World • King Tutankhamun 1337-1327 BC • and 80 Years Later • Index • Credits.
Publisher: Welbeck
Imprint: Andre Deutsch
Page Extent: 160
Format: Hard Cover
Subject: Archaeology