11 Ways Economics Gets it Wrong 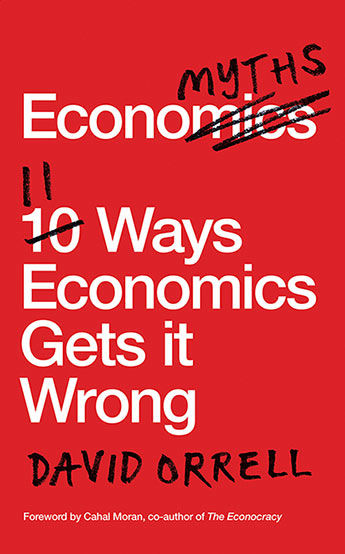 A brand new edition of David Orrell's acclaimed critique of what economics gets very wrong.

When Economyths was first published in 2010, David Orrell showed how mainstream economics is based on key myths such as fair competition, rational behaviour, stability and eternal growth - and how these myths lead paradoxically to their opposites: inequality, an irrational economy, financial instability and a collision with nature’s limits.

Since then, we’ve had Occupy, political upheaval, flash crashes in financial markets, the warmest few years in recorded history - and a growing chorus demanding fundamental reform. So how has economics responded?

In this revised and expanded edition, Orrell shows how the ten myths still dominate economics. And in a new final chapter, he uncovers, demolishes and develops an alternative to the greatest economyth of all - the one that will finally lead to the collapse of orthodox economics.

David Orrell is an applied mathematician and author of popular science books. He studied mathematics at the University of Alberta, and obtained his doctorate from Oxford University on the prediction of nonlinear systems. His work in applied mathematics and complex systems research has since led him to diverse areas such as weather forecasting, economics, and cancer biology. His work has been featured in the New Scientist, the Financial Times and on BBC Radio.