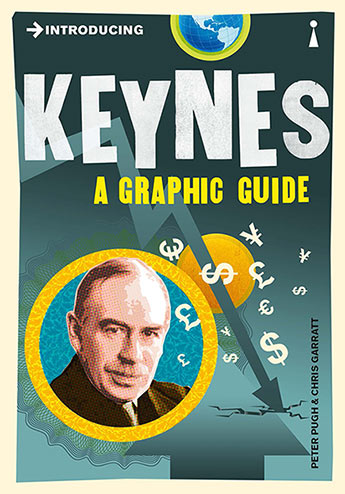 Keynes was arguably the twentieth century's greatest economist, and as a new recession bites it is his ideas that are being called into action by governments across the globe.

In the wake of the Great Depression, Keynes advocated that governments spend vast anounts of money to create jobs and prosperity. His ideas revolutionized government and helped create an economic consensus that was shattered only by the monetarism of Reagan and Thatcher's 1980s.

Keynes himself was a complex man: an establishment figure who married a Russian ballerina in spite of his homosexuality. He was passionate about the arts and considered by all who met him to be supremely clever.

Peter Pugh and Chris Garratt's graphic introduction is the essential read for anyone keen to understand this brilliant man and prophetic thinker.

Peter Pugh read History at Cambridge and is the author of more than 30 books on business and history, including the seminal guide to the Guinness scandal and a hugely acclaimed three-volume official history of Rolls-Royce, The Magic of a Name. Chris Garratt is an illustrator. He is the cartoonist behind the legendary 'Biff' comic strip in the Guardian.