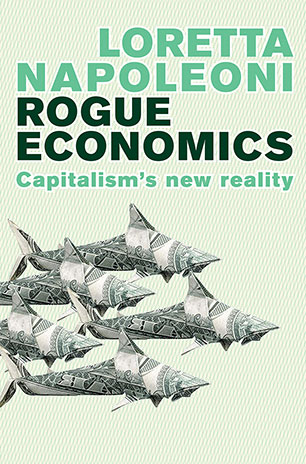 A spirited expose of the rapid and unexpected transformations generated by market forces unleashed under globalisation, and the impact on people's lives around the world.

No matter where we live in the world, rogue economics is reshaping our personal lives. It is a product of the eternal battle between politics and economics, and nothing less than the price humanity pays for progress.

What do Eastern Europe's booming sex trade, America's subprime mortgage lending scandal, China's fake goods industry and celebrity philanthropy in Africa have in common? All over the world political upheaval, free trade, deregulated financial markets and the internet have created conditions in which unscrupulous entrepreneurs trade without restriction. With bio-pirates trolling the blood industry and games like World of Warcraft spawning online sweatshops, rogue industries are being allowed to transmute into global empires.

Syndicated journalist and international finance expert Loretta Napoleoni examines how the world is being reshaped by dark economic forces, creating victims out of millions of ordinary people whose lives have become trapped inside a fantasy world of consumerism. Rogue Economics reveals the hidden architecture of our world, and provides fresh insight into many of the most insoluble problems of our era.

Greg Palast, author of The Best Democracy Money Can Buy
More books by this author

Loretta Napoleoni is the author of the bestselling Terror Inc.: Tracing the Money behind Global Terrorism, which has been translated into twelve languages. She is an economist and has worked for international banks and financial organisations. One of the world's leading experts on money laundering and terror financing, she has worked as London correspondent and columnist for La Stampa, Le Monde and other newspapers. A former Fulbright scholar, she holds an MA in international relations and economics from SAIS, Johns Hopkins University, and a MPhil in terrorism from the London School of Economics. In the early 1990s, she was one of the few people to interview the Italian Red Brigades. For her work as a consultant on the commodities markets, she traveled regularly to Pakistan, Turkey, Iran, Iraq, Syria and other Middle Eastern countries, where she has met senior financial and political leaders. She lives in London.

1. In bed with the enemy

3. The end of politics

10. The mythology of the market-state

11. The extravagant force of globalization