The Economics of Just About Everything

The hidden reasons for our curious choices and surprising successes 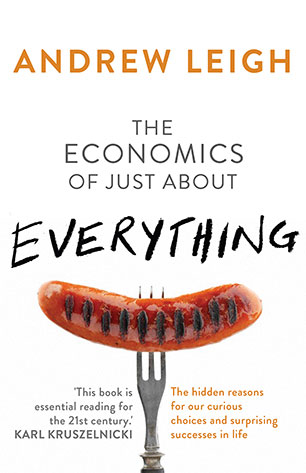 A fun and illuminating book full of surprising facts and amazing insights about how the laws of economics affect our everyday lives.

Did you know that another 10 cm of height boosts your income by thousands of dollars per year? Or that a boy born in January is nearly twice as likely to play first grade rugby league as a boy born in December? Or that natural disasters attract more foreign aid if they happen on a slow news day? And that a perfectly clean desk can be as inefficient as a messy one?

Drawing on examples and data from across Australia, Andrew Leigh shows how economics can be used to illuminate what happens on the sporting field, in the stockmarket, and at work. Economics has things to say about AC/DC and Arthur Boyd, dating and dieting, Grange and Geelong, murder and poverty. Incentives matter, often in surprising ways, and seemingly simple everyday activities can have unexpected outcomes. Insights from behavioural economics can also help us make better decisions.

If you like fresh facts and provocative ideas, this is great train and weekend reading. You'll soon see the world and the people around you in a new light.

'Economics isn't the only thing, but Andrew Leigh reminds us that it can explain almost everything.' - George Megalogenis

'What do you get when you cross a politician with an economist? A captivating, charming, and nicely-written book. Who knew?' - Annabel Crabb
More books by this author

Andrew Leigh is the federal member for Fraser, ACT. He has a PhD from Harvard, was a Professor of Economics at the Australian National University, appears regularly in the media, and is author of several books, including Battlers and Billionaires.

1 For love or money

4 Looking for a raise

The word “economics” in the title is perhaps misleading – this is not specifically a book for those interested in, or involved with, economics. I’m not even certain that it takes an economic view of the issues discussed – it seemed to me that it could just as easily be called a “scientific” approach that the author takes to a variety of current issues.Let me start with the aspects of the book which I like least, and then I will go on to explain why I think it is actually a brilliant book, and a definite “must read”. Firstly, I am not comfortable with the rather American approach of recounting personal tales and anecdotes to illustrate the point, especially when the author specifically brings his own life or family connections into the narrative. For example:

“When I was 22, I clashed with Bob Carr over the issue of criminal justice” (p129)
“To test the efficiency of sports betting markets, I joined in my office AFL tipping competition...” (p169)
Writing about Zoe Hall who was killed by Martin Bryant (Port Arthur massacre): “I was a summer clerk at the law firm where Zoe worked, and she was my mentor” (p113)
“Last year I helped open Australia’s fastest supercomputer on the ANU campus...” (p167)

Maybe I am used to academic writing, and this overly personal, chatty approach, no doubt intended to appeal to the “average” reader, often left me wondering “so what?”Secondly, there was a lot of not-terribly-relevant material which I felt should have been edited. For example, all the material about the average ages of novelists when they wrote, or pop performers when they had hit singles. I really could not see what use anyone could make of all this sort of information. This seemingly irrelevant data was very tedious to wade through, and at that point of the book (Chapter 5 “Careering through Life”) I was very tempted to give up reading it altogether, and if I had not committed to doing this review, I certainly would have.There was simply too much trivial content, and the link with economics was so specious as to seem a gimmick to link together a random collection of opinions on all manner of subjects:

“For joy-riding teenagers, road deaths are often a consequence of putting pleasure now ahead of being alive tomorrow” (p37)
“The growth in girths over the past generation isn’t primarily because we’re doing less exercise, it’s because we’re consuming more kilojoules (and, in particular, more carbohydrates). In economic language, the explanation has to do with inputs, not outputs.” (p41)
“So how many children should you have? Economics doesn’t give a single answer, but it does urge you to think about how your decision will affect your happiness over a whole lifetime.” (p27)

No way could I recommend any of this to colleagues, friends or family members. Which is a terrible pity, because the later chapters, particularly Chapter 6 “Cops and Dollars” and Chapter 7 “Helping the World’s Poor”, are brilliant and deserve to be widely read and discussed. There is much too in Chapter 4 “Looking for a Raise” which should be better understood. Suddenly Karl Kruszelnicki’s endorsement on the front cover made sense: this truly is essential reading for anyone engaged with some of the key issues of our time.

I have talked about, quoted from, and promoted these chapters passionately since reading them, and I think the ideas Andrew Leigh raises should be right out in the public domain. This is an essential book for anyone engaged in educating the next generation, whether parents, teachers or academics. Anyone involved in secondary or tertiary Debating, Social Studies, Ethics or any number of related areas needs to engage with these ideas. This book can be used to stimulate coming generations to see these issues from new perspectives, to make connections where none were seen before, and to approach society and its data with passion and intelligence.

This is certainly a book I will be using in and out of the classroom, and the ideas and approaches included in it deserve the widest possible audience. “Thought-provoking” is such a cliché, but I found myself thinking about the issues raised here long after I had finished reading. A definite “must-read.”
Kylie Salisbury, Careers Adviser, Fort Street High School NSW