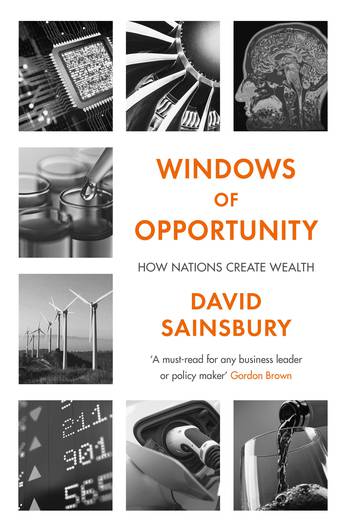 Is neoclassical economics dead? Why have the biggest industrial economies stagnated since the financial crisis? Is the competitive threat from China a tired metaphor or a genuine danger to our standard of living?

Lord David Sainsbury draws on his experience in business and government to assemble the evidence and comes to some startling conclusions. In Windows of Opportunity, he argues that economic growth comes not as a steady process, but as a series of jumps, based on investment in high value-added firms. Because these firms are engaged in winner-takes-all competition, rapid growth in one country can indeed come at the expense of growth in another, contrary to the standard models. He suggests a new theory of growth and development, with a role for government in 'picking winners' at the level of technologies and industries rather than individual firms. With the role of industrial policy at the centre of the Brexit debate, but a significant intellectual gap in setting out what that policy should be, this book could not be more timely.
More books by this author

David Sainsbury (Lord Sainsbury of Turville) was Finance Director of J. Sainsbury plc 1973-90 and Chairman 1992-8. He was Minister of Science and Innovation in Tony Blair's Labour Government from July 1998 until November 2006. He founded the Gatsby Charitable Foundation, and founded and chairs the Institute for Government. In 2007 he produced a review of the Government's science and innovation policies, The Race to the Top, and in 2013 published Progressive Capitalism: How to Achieve Economic Growth, Liberty and Social Justice. He has been Chancellor of the University of Cambridge since October 2011.