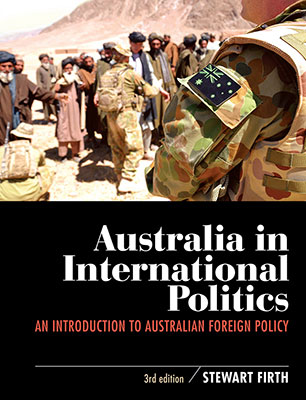 A revised edition of a widely used introduction to Australian foreign policy. It explains Australia's increasingly close connections to the rest of the world, in defence, trade, financial markets, aid, human rights and its response to refugees.

The world changed for Australia after the terrorist attacks on the US on September 11, 2001 and the Bali bombings of 2002. Security became the dominant theme of Australian foreign policy. Australian military forces remained in Afghanistan years later, opposing the terrorist threat of the Taliban, while hundreds of Australian troops and police worked with public servants to build the state in Asia-Pacific countries such as East Timor and Solomon Islands. The world changed for Australia, too, when the global financial crisis of September 2008 threatened another Great Depression. Meantime the international community made slow progress on measures to stem climate change, potentially Australia's largest security threat.

In a newly revised and updated edition, Australia in International Politics shows how the nation is responding to these challenges. The book describes how Australian foreign policy has evolved since Federation and how it is made. It examines Australia's part in the United Nations, humanitarian intervention and peacekeeping. It analyses defence policy and nuclear arms control. It explains why Australia survived the global financial crisis and why the G20 has become the leading institution of global economic governance. It charts the course of Australia's climate change diplomacy, the growth of Australia's foreign aid, human rights in foreign relations and the rise of China as a great power.

Written by one of Australia's most experienced teachers of international relations, Australia in International Politics explains Australian foreign policy for readers new to the field.

'. one of the best books on Australian foreign policy that I have read in recent years' - Samuel M. Makinda, Australian Journal of Political Science
More books by this author

Stewart Firth is a Visiting Fellow in the State, Society and Governance in Melanesia Program at the Australian National University.

5. The United Nations and International Security

9. Globalisation and the Global Financial Crisis

10. The Politics of International Trade