The rise of the religious right in Australian politics 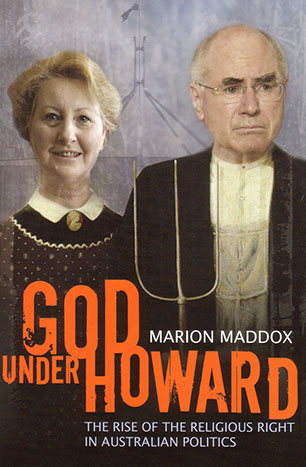 The first sustained examination of the impact of religion on contemporary Australian politics reveals the growing influence of the religious right on John Howard and his government.

'God is working for the Liberal Party and this fine, disturbing book arrives just in time to tell us how. An eye-opening exploration of the real politics of Australia.' - David Marr

'. a convincing and disturbing picture of the capacity of John Howard, and some of his friends, to co-opt God for their own political agenda.' - Dorothy McRae-McMahon

In the 2004 federal election campaign religion seemed to spring out of nowhere to take centre stage. In fact it was just the latest act in a drama that has been quietly developing for over a decade in Australian politics. Assiduously cultivated by John Howard, an extreme form of conservative Christianity now has real influence on our politicians and their policies.

How has American-style evangelicalism become so prominent in secular Australia? Why are abortion, creationism and family values now on the political agenda? Why is religion no longer a private matter for public figures?

In God Under Howard Marion Maddox explains how John Howard has harnessed the conservative social agenda and market-based ideology of American fundamentalists in order to stay in power. As a result, she argues that Australia's democratic, egalitarian culture is now under serious assault.
More books by this author

Marion Maddox is the leading authority on the intersection of religion and politics in Australia. She has taught at the Universities of Adelaide and South Australia, and is presently at Victoria University, Wellington.

Ch 3 - The politics of death