How to Kill a Country 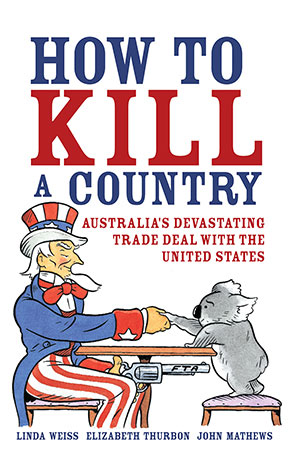 The first authoritative account of the fashioning of the Free Trade Agreement between Australia and the USA reveals how the Australian government has deliberately and surreptitiously sacrificed Australia's interests in the deluded pursuit of a special relationship' with the superpower.

It's hard to believe an Australian government could sign a deal which so betrays Australia's interests. How to Kill a Country demonstrates how the FTA as negotiated will seriously damage Australia's institutions, interests and identity.

Three of Australia's leading policy analysts have investigated the fine print of Australia's Free Trade Agreement with the US. What they found is that the lopsidedness of the deal is just the beginning of the story. Most harmful is the sacrifice of our national autonomy and control over key institutions that underpin our prosperity.

* Our medicines will be more expensive because the Pharmaceutical Benefits Scheme will be undermined, and competition from generics will be almost extinguished;

* Our agricultural exports will be compromised because we open the door to new pests and diseases;

* Our top exports beef, dairy, wine and steel will not see the full removal of tariffs and quotas for up to 18 years;

* Buy American norms will prevail over Buy Australian in our government procurement markets;

* Royalty flows to the US will increase through greater protection for US patents and copyrights.

The Australian government claims the FTA will boost Australia's exports and local economy. The reality is that the FTA overturns Australia's laws and institutions, and turns the country into an appendage of the United States. Australia faces the prospect of becoming a Vanishing Country' in the way that Canada is described, 15 years after signing its FTA with the US.
More books by this author

Linda Weiss is Professor of Government and International Relations at the University of Sydney. Her work in the comparative and international politics of economic development has been translated into several languages. She is the author of four books, including The Myth of the Powerless State. Elizabeth Thurbon is a Lecturer in the School of Politics and International Relations at the University of NSW. She has published on the financial systems of East Asia and is collaborating on a large comparative project, researching government-business relations in the global economy. John Mathews is Professor of Strategic Management in the Graduate School of Management at Macquarie University. He is the author of Tiger Technology and other studies on the rise of East Asia in the world economy. His new book will focus on monopoly power in civilizations old and new.