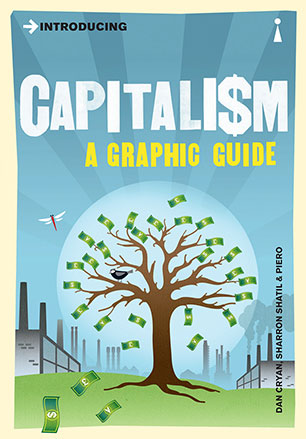 Brand-new for Icon's graphic guide series to big ideas: the history, philosophy and politics of the biggest, most successful but most controversial idea ever: Capitalism.

Capitalism now dominates the globe, both in economics and ideology, shapes every aspect of our world and influences everything from laws, wars and government to interpersonal relationships. Introducing Capitalism tells the story of its remarkable and often ruthless rise, evolving through strife and struggle as much as innovation and enterprise. Tracing capitalism from its beginning to the present day, Dan Cryan and Sharron Shatil, alongside Piero's brilliant graphics, look at its practical and theoretical impact. They cover the major economic, social and political developments that shaped the world we live in, such as the rise of banking, the founding of America and the Opium Wars. The book explores the leading views for and against, including thinkers like Adam Smith, Karl Marx, Theodor Adorno and Milton Friedman, together with the connections between them and their historical context. Capitalism has influenced everything in the 21st-century world. For anyone who wants to gain a broad understanding of this fascinating subject, this book cuts across narrow academic lines to analyse an all-encompassing feature of modern life.
More books by this author More books in this series

Dan Cryan has degrees in Philosophy from UCL and now works as a market analyst in London. Sharron Shatil is a Philosophy lecturer at the Open University in Israel. Piero is an illustrator, artist and graphic designer whose work has twice been included in the Royal College of Art exhibition in London. Previous Introducing titles include Aesthetics, Shakespeare and Nietzsche.