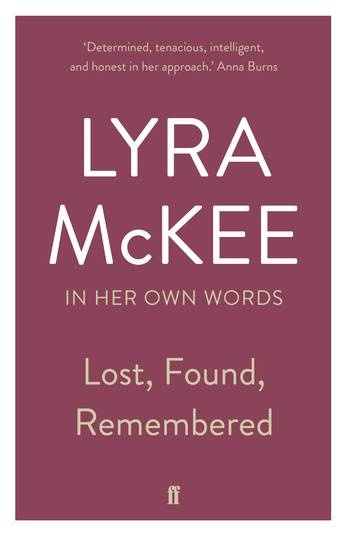 A memorial collection of writings by the murdered young journalist Lyra McKee - from viral articles to unpublished material - that celebrates her life, work and creative legacy: one that will live on.

When the Northern Irish journalist Lyra McKee was murdered in Derry in April 2019 aged just 29, she was survived by her articles that had been read and loved by thousands worldwide.

This memorial anthology will weave together the pieces that defined her reputation as one of the most important and formidable investigative journalists of her generation. It showcases the expansive breadth of McKee's voice by bringing together unpublished material alongside both her celebrated and lesser-known articles.

Released in time for the anniversary of her death, it reveals the sheer scope of McKee's intellectual, political, and radically humane engagement with the world - and lets her spirit live on in her own words.
More books by this author

Lyra McKee was born in 1990 in Belfast. She won Sky News' Young Journalists Award in 2006 and became an investigative reporter, writing for numerous newspapers, magazines and websites. She was featured as one of Forbes' 30 under 30 and a rising literary star by the Irish Times. Lyra McKee was fatally shot during rioting in Derry on the 18th April 2019. At the time of her death,she was working on a piece of investigative journalism entitled The Lost Boys which is not yet ready for publication, but remains under review with Faber and those closest to her.