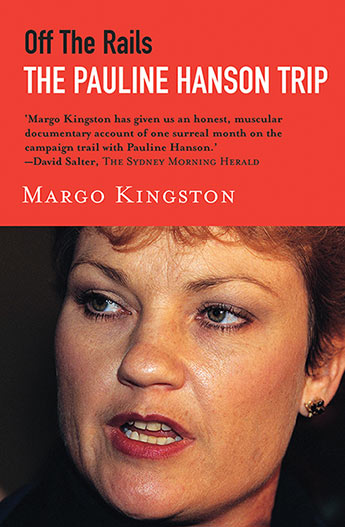 A look at the rise, fall and rise again of Pauline Hanson and One Nation, as well as the symbiotic relationship betweens politicians and the press.

'Kingston is a writer who brings an unusually raw brand of passion to her work. . . . [the book] is much more than a profile of One Nations' leader and her supporters; it's an analysis of political campaigning and media coverage in a post-modern world - a sketch of some emerging faultlines in the cosy culture of politics and journalism.' Catharine Lumby, THE BULLETIN

After Pauline Hanson's doomed 1998 election campaign, and the scandals and deregistration that followed, the media declared Pauline Hanson a spent force and One Nation a dead party. The 2001 Queensland and 2014 Federal elections proved them wrong: Hanson is back. Why is it we are so surprised by her re-emergence: the deep dissatisfaction that she tapped into in 1996 is a problem that did not go away.

Margo Kingston takes us on a kaleidoscopic trip through the back country of Australia's political landscape during the 1998 election. This is strange territory, where bad press becomes good news, enemies trade advice and the political-media game is played at its most raw. Beyond the blunders, emotions boil as Hanson's road show slams into confrontations over race and Australia's identity.

Margo Kingston gave up a career as a commercial litigation solicitor for journalism in her mid-20s. She has been in the press gallery for ten years, working for the Herald, the Age, and the Canberra Times. Margo worked for Jana Wendt as her political researcher on A Current Affair in the late 1980s.