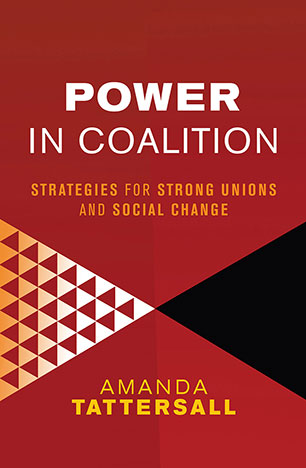 How can communities organise effectively to promote social change in the 21st century? Amanda Tattersall examines successful coalitions between unions and community organisations in three countries - Australia, US and Canada - extracting invaluable lessons for unions and community activists everywhere.

How can we change things in an age in which governments are fixated on the bottom line and conventional protest rallies have lost their punch?

Coalitions can be important tools for social change and union revitalisation. What makes them successful? What causes them to fail? Community organiser Amanda Tattersall examines successful coalitions between unions and community organisations in three countries: the public education coalition in Sydney, Toronto's Ontario Health Coalition fighting to save universal health care, and Chicago's living wage campaign run by the Grassroots Collaborative. She explores when and how coalitions can be a powerful strategy for social change, organisational development and union renewal.

Power in Coalition is essential reading for unionists, community activists, and anyone passionate about social change.

'A fascinating insight into the potential for coalitions to restore the balance of power between governments and the communities they are supposed to serve.' - Julian Burnside AO QC

'Amanda Tattersall shows that coalitions, though hard work at times, are the best means we have to rebalance power, beat poverty and injustice, and build a future that includes all of us, especially the weakest.' - Tim Costello AO, CEO, World Vision Australia

'If unions are to maximise their influence in the 21st century they must build alliances with other organisations around economic, social and ecological concerns affecting humanity. This book shows it is possible to build the necessary coalitions to achieve this end.' - Jack Mundey AO, instigator of the 1970s Green Bans movement in Sydney
More books by this author

Amanda Tattersall is Deputy Assistant Secretary of Unions NSW and founder and Director of the Sydney Alliance. She is also co-founder and chair of GetUp and an Honorary Associate in Work and Organisational Studies at the University of Sydney.

1. The Elements of Coalition Unionism

3. Living Wages and the Grassroots Collaborative in Chicago

Conclusion: The Possibilities of Successful Coalitions