The Unravelling of the Old Order in the Middle East 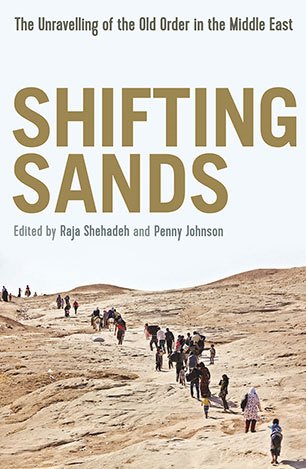 A fresh look at the Middle East today, tomorrow and in the past: fifteen writers, with an introduction by Raja Shehadeh, author of the Orwell Prize winning Palestinian Walks, and Penny Johnson.

At a time when the Middle East dominates media headlines more than ever - and for reasons that become ever more heartbreaking - Shifting Sands brings together fifteen impassioned and informed voices to talk about a region with unlimited potential, and yet which can feel, as one writer puts it, 'as though the world around me is on fire'?

Collecting together the thoughts and insights of writers who live or have deep roots in there, Shifting Sands takes a look at aspects of the Middle East from the catastrophic long-term effects of the carving up of the region by the colonial powers after World War One to the hopes and struggles of the Arab spring in relation to Egypt, Iran and Syria. And it asks questions such as: what is it like to be a writer in the Middle East? What does the future hold? And where do we go from here?

For all those who are wearied by the debates surrounding the Middle East - often at best ill-informed and at worst, defeatist propaganda - this intelligent, reasoned perspective on life in the Middle East is a breath of fresh air.
More books by this author

List of contributors: James Barr - Avi Shlaim - Salim Tamari - Ramita Navai - Dawn Chatty - Robin Yassin-Kassab - Malu Halasa - Marilyn Booth - Mai Al-Nakib - Selma Dabbagh - Tamim Al Barghouti - Justin Marozzi - Alev Scott-Khaled Fahmy
Raja Shehadeh is Palestine's leading writer. He is also a lawyer and the founder of the pioneering Palestinian human rights organisation Al-Haq. Shehadeh is the author of several acclaimed books including Strangers in the House and Occupation Diaries and winner of the 2008 Orwell Prize for Palestinian Walks (all Profile). He lives in Ramallah in Palestine.
Penny Johnson is an academic at Birzeit University in Ramallah and has published articles and edited a number of important books on Palestine.