How the Australian government is controlling public opinion and stifling debate 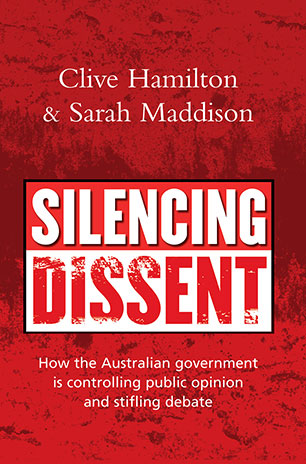 A frightening analysis of the tactics used by the Howard government to silence independent experts and commentators as well as public servants and organisations which criticise its policies.

Silencing Dissent is a timely, disturbing and unnerving book'

from the foreword by Robert Manne

For over a decade, the Howard government has found ways to silence its critics, one by one. Like the proverbial frog in boiling water, Australians have become accustomed to repeated attacks on respected individuals and organisations. For a government which claims to support freedom of speech and freedom of choice, only certain kinds of speech and choices appear to be acceptable.

Silencing Dissent uncovers the tactics used by John Howard and his colleagues to undermine dissenting and independent opinion. Bullying, intimidation, public denigration, threats of withdrawal of funding, personal harassment, increased government red tape and manipulation of the rules are all tools of trade for a government that wants to keep a lid on public debate. The victims are charities, academics, researchers, journalists, judges, public sector organisations, even parliament itself.

Deeply disturbing, Silencing Dissent raises serious questions about the state of democracy in Australia.
More books by this author

Clive Hamilton is the executive director of the Australia Institute and author of the bestsellers Growth Fetish and Affluenza.

Sarah Maddison lectures in the School of Politics and International Relations at the University of NSW and is author of Activist Wisdom.