Successes and Failures of Post-war Immigration 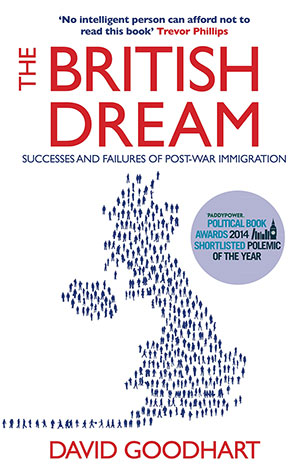 One of Britain's most influential centre-left thinkers examines UK immigration policy and argues that there have been unforeseen consequences which need urgently to be addressed.

In The British Dream, David Goodhart tells the story of post-war immigration and charts a course for its future. Drawing on hundreds of interviews with people from all over the country and a wealth of statistical evidence, he paints a striking picture of how Britain has been transformed by immigration and examines the progress of its ethnic minorities - projected to be around 25 per cent of the population by the early 2020s.

Britain today is a more open society for minorities than ever before, but it is also a more fragmented one. Goodhart argues that an overzealous multiculturalism has exacerbated this problem by reinforcing difference instead of promoting a common life. The multi-ethnic success of Team GB at the 2012 Olympics and a taste for chicken tikka masala are not, he suggests, sufficient to forge common bonds; Britain needs a political culture of integration.

Goodhart concludes that if Britain is to avoid a narrowing of the public realm and sharply segregated cities, as in many parts of the US, its politicians and opinion leaders must do two things. Firstly, as advocated by the centre right, they need to bring immigration down to more moderate and sustainable levels. Secondly, as advocated by the centre left, they need to shape a progressive national story about openness and opportunity - one that captures how people of different traditions are coming together to make the British dream.
More books by this author

David Goodhart is the director of the think tank DEMOS, and the editor-at-large of Prospect magazine, which he founded in 1995. He was previously a senior correspondent for the Financial Times.