The Craft of Governing

The contribution of Patrick Weller to Australian political science 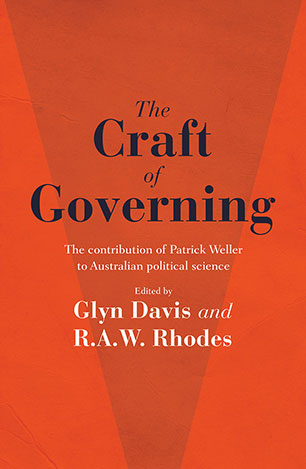 How government works is the central question of political science, and the focus of this collection of essays about the key aspects of government in Australia.

'Bargaining and puzzling; power and thought; dealing and agonising; compromise and commitment. These are two sides of political practitioners whether politician, public servant or campaigner. Understand the interplay and we can, just sometimes, make sense of the real world we seek to interpret.'

Patrick Weller's observation comes from half a century of contemplating politics in action. The question of how government works lies at the heart of political science, and it has also been the career focus of this pioneer in the field.

The Craft of Governing offers a tribute to the contribution of Patrick Weller to Australian political science, with chapters from leading political commentators including Michelle Grattan, Peter Shergold, Bob Jackson and James Walter. Contributors consider the role of the prime minister, approaches to studying executive government, the continuing significance of senior public servants and the nature of leadership in public bureaucracies. They also reflect on how insights from the study of domestic public policy can be applied to international organisations, challenges faced by Westminster democracies and approaches to political biography.

The Craft of Governing is an invaluable resource for readers interested in approaches to studying politics and the development of political science as a discipline.
More books by this author

3 Two Halves of a Whole: Rudd and Gillard and the Politics of Prime Ministerial Vulnerability - Michelle Grattan

6 The Machinery of Government: The Evolution of Research on Ministerial Portfolios - Evert Lindquist

9 Agents of Influence: Weller and Xu on International Organisations from a Public Policy Perspective - Jason Sharman