Prospects for the great survivors 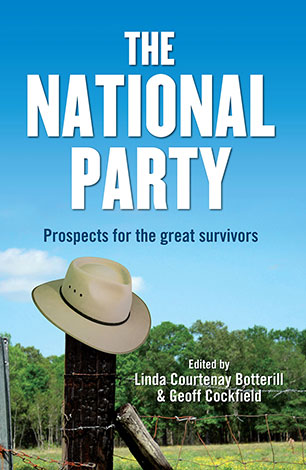 After a decade of declining votes and marginalisation within the Coalition, the future of National Party is uncertain. Will its insistence on its agrarian identity lead to its demise, will it amalgamate with federal and state Liberal parties across the country, or will it continue to be the great survivor of Australian politics?

The National Party of Australia is under challenge. Will it be able to adapt and survive or will it become increasingly irrelevant in Australian politics?

With population growth in some coastal and hinterland areas and decline in inland agricultural areas, the face of rural and regional Australia is changing. As a result, the National Party's traditional support is being eroded. Within the long-standing Coalition, the influence of the Nationals appears to be in decline, yet they continue to resist amalgamation with the Liberal Party.

The authors describe a small party, with a strong agrarian identity, surviving amongst major parties that are deeply rooted in an increasingly dominant urban political landscape. They consider the policy and political options and potential electoral strategies for survival and perhaps, renewal.

'Comprehensively brings up to date the assessments of the past performance of, and future prospects for, Australia's second oldest political party - essential reading for students of politics, those interested in politics, and National Party practitioners.' - Paul Davey, former federal director of the National Party
More books by this author

Linda Botterill is a Fellow in the Political Science Program at the Research School of Social Sciences at the Australian National University. Geoff Cockfield lectures in the Faculty of Business at the University of Southern Queensland.

2 An agrarian party in a developed democracy

3 Beyond Country to National

4 A rural party in an urban nation

7 Leadership domination in a populist party

9 The Nationals, regionalism and federal reform

12 From Country to National to regional?