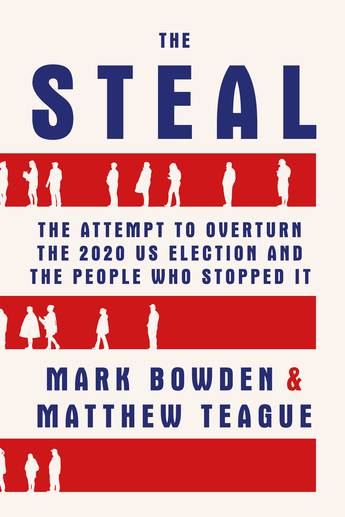 Veteran journalists Mark Bowden and Matthew Teague offer a week-by-week, state-by-state account of the effort to overturn the 2020 US presidential election.

In the sixty-four days between November 3 and January 6, President Donald Trump and his allies fought to reverse the outcome of the vote. Focusing on six states - Arizona, Georgia, Michigan, Nevada, Pennsylvania and Wisconsin - Trump's supporters claimed widespread voter fraud.

Caught up in this effort were scores of activists, lawyers, judges and state and local officials, among them Rohn Bishop, enthusiastic chairman of the Fond Du Lac, Wisconsin, Republican Party, who would be branded a traitor for refusing to say his state's election was tainted, and Ruby Freeman, a part-time ballot counter in Atlanta who found herself accused of being a 'professional vote scammer' by the President.

Working with a team of researchers and reporters, Mark Bowden and Matthew Teague uncover never-before-told accounts from the election officials fighting to do their jobs amid outlandish claims and threats to themselves, their colleagues and their families.

The Steal is an engaging, in-depth report on what happened during those crucial nine weeks and a portrait of the heroic individuals who did their duty and stood firm against the unprecedented, sustained attack on the US election system and ensured that every legal vote was counted and the will of the people prevailed.
More books by this author

Mark Bowden is the author of fifteen books, including Killing Pablo and Black Hawk Down. He reported at the Philadelphia Inquirer for twenty years and now writes for The Atlantic and other magazines.

Matthew Teague is a contributor to National Geographic, The Atlantic, Esquire and other magazines, and executive producer of Our Friend, a feature film that premiered in 2021.