Selected speeches from a life of leadership 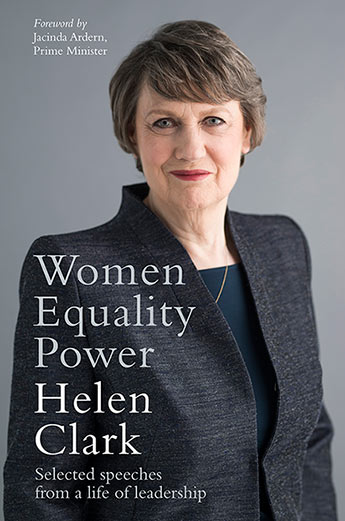 'Helen Clark has reshaped our views on women and politics and the right of women to take up the mantle of political leadership.' PROFESSOR JENNIFER CURTIN, UNIVERSITY OF AUCKLAND

Women, Equality, Power is a celebration of an outstanding leader who continues to strive and work for change, and it's a rallying call for other women leaders, whether they are in positions of political, economic or social power.

Helen Clark has been a political leader for more than 40 years, since first running in local elections in the 1970s. She entered parliament as a 31-year-old in 1981, led the Labour Party to victory in 1999 and was Prime Minister of New Zealand for nine years. She then took on a critical international role as Administrator of the United Nations Development Programme in New York.

One of her key focuses throughout this time has been the empowerment of women, and she has paved the way for other women to step up and lead.

With a foreword by the Rt Hon. Jacinda Ardern, Prime Minister of New Zealand, this is a timely and important book.


'If more issues of importance to women are to rise to the top of political, legislative and budget priorities, more women must sit at the top tables . . . Women must be drivers of development - not just passive beneficiaries of plans designed by others.' HELEN CLARK ONZ

'Helen Clark often said, and continues to say, that having women in leadership positions not only sends a powerful message to other women but also changes societies' perceptions of gender roles and encourages girls to believe that no door is closed to them.' JACINDA ARDERN, PRIME MINISTER OF NEW ZEALAND
More books by this author

Helen Clark was Prime Minister of New Zealand for three successive terms from 1999-2008. She was the first woman to lead a party to electoral victory in New Zealand.

Throughout her tenure as Prime Minister, and as a Member of Parliament for more than 27 years, Helen engaged widely in policy development and advocacy across the international, economic, social, environmental and cultural spheres. She advocated strongly for New Zealand's comprehensive programme on sustainability and for tackling the problems of climate change. She was an active leader of her country's foreign relations, involved in a broad range of international issues.

In April 2009, Helen became Administrator of the United Nations Development Programme (UNDP). She was the first woman to lead the organisation and served two terms in the role. At the same time, she was Chair of the United Nations Development Group, a committee consisting of all UN funds, programmes, agencies and departments working on development issues. As Administrator, she led UNDP to be ranked the most transparent global development organisation. She completed her tenure in 2017.

Helen continues to be a strong voice for sustainable development, climate action, gender equality and women's leadership, peace and justice, and for action on non-communicable diseases and HIV.