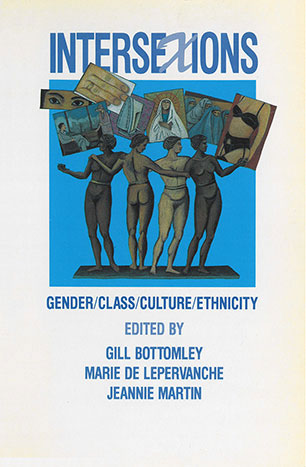 Do writings about ethnicity, class and gender form a 'holy trinity' or challenge previous unidimensional analyses? Intersexions aims to understand the processes by which relations of power are maintained, reproduced and resisted. It also examines modes of representation within areas such as social theory, feminism, and development theory.

Do writings about ethnicity, class and gender form a 'holy trinity' or challenge previous unidimensional analyses?

Intersexions accepts the triple perspective but goes further. One aim is to understand the processes by which relations of power are maintained, reproduced and resisted. Intersexions also examines modes of representation: within social theory, feminism, development theory and discussions of capitalism and postcolonialism, as well as dominant ideological notions of caste, domesticity and 'success'.

The writers' approaches are all critical but concerned also with providing alternatives. Comparative and specific analyses are combined, attention is paid to the written and spoken material of the people 'represented' and their own positions as commentators examined. Topics range from discussions of family ideology and paid and domestic work, to analyses of writings by Aboriginals, Vanuatuans and second generation Greek Australians and critiques of the cultural construction of gender and ethnicity in Bangladesh, India and Indonesia.

Themes recur and overlap. Unitary categories are questioned and the processes by which relations described as 'class', 'ethnic', 'cultural' and 'gender' intersect and interact are demonstrated.
More books by this author

GILL BOTTOMLEY, Associate Professor of Anthropology at Macquarie University, is the author of After the Odyssey and co-editor of Family in the Modern World. MARIE DE LEPERVANCHE is Associate Professor of Anthropology at the University of Sydney and is the author of Indians in a White Australia and co-editor of Crossing Boundaries: Feminism and the critique of knowledges. JEANNIE MARTIN is Senior Lecturer in Humanities at the University of Technology Sydney. Gill Bottomley and Marie de Lepervanche co-edited The Cultural Construction of Race and Ethnicity, Class and Gender in Australia.

1 Moving in from the margins: Gender as the centre of cultural contestation of power relations in south India - Kalpana Ram

3 Housemaids: The effects of gender and culture on the internal and international migration of Indonesian women - Kathy Robinson

4 The politics of difference: Feminism, colonialism and decolonisation in Vanuatu - Margaret Jolly

5 Through their own eyes: An interpretation of Aboriginal women's writing - Jan Larbalestier

8 The family: in the national interest? - Marie de Lepervanche