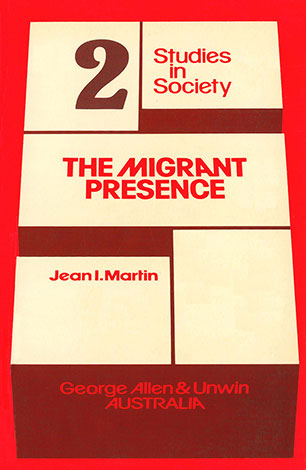 The Migrant Presence examines the way in which Australian institutions have responded to the influx of migrants of non-Anglo-Saxon origin, tracing the decline of assimilationist philosophy and the rising trend of migrants asserting their rights and dignity as legitimate minorities in an ethnically plural society.

This classic work in Australian sociology examines the way in which Australian institutions have responded to the influx of migrants of non-Anglo-Saxon origin. Until the end of the sixties, the typical Australian reaction was that these migrants could be, and were being, assimilated into the mainstream of British-Australian society and culture. At the end of the sixties, both the assimilationist philosophy and the claim of successful and effortless absorption came into question, and migrants of non-English speaking background began to be defined as problems. Now, in a third phase, migrants themselves are rejecting the notion that they are, above all, problems or people with problems. Instead they are asserting their rights and dignity as legitimate minorities in an ethnically plural society. The author goes on to trace in detail the response of the institutions of education, health, and the trade unions to 'the migrant presence'.

'Well written, sympathetic to the point of anger and should be included in any course on Australian society or public policy. an invaluable contribution.' - James Jupp, Politics
More books by this author

Jean Martin, Foundation Professor at La Trobe University from 1966 to 1974, was Senior Fellow in the Sociology Department of the Research School of Social Sciences, ANU, until her death in 1979. Dr Martin was a pioneer in migrant research in Australia, with her professional interest dating from her 1955 PhD thesis on the settlement of war-time displaced persons. Her more recent work includes the Report for the National Population Inquiry on which this book is based, along with a major research project on the Vietnamese in Australia.

3 Child Migrant Education in the Fifties and Sixties

4 From Migrant to Multicultural Education in the Seventies