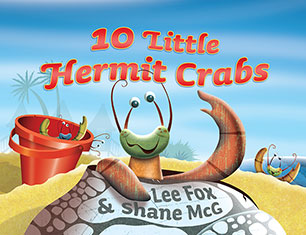 A terrific read-aloud, counting, 'look and find' book, perfectly pitched for the early childhood market from an award-winning author. Fabulously illustrated with bright and lively artwork.

Ten little hermit crabs scamper to the beach, ready to play and explore

But they had better watch out.

Can you count the hermit crabs?
More books by this author

Lee Fox is the author of the hilarious picture book, Ella Kazoo Will Not Brush her Hair, illustrated by Cathy Wilcox (Lothian, 2006) and shortlisted in the Early Childhood Category of the 2007 CBCA awards. Her most recent book is a YA novel, Other People's Country (Lothian, 2008).

Prior to becoming a writer, Lee was a production assistant for a commercial radio station, a Mormon, a cook in a childcare centre and the store manager on a remote Aboriginal community - and she has five children. Her writing career began in 2000, with several articles for the Age.

Shane McG is a Melbourne based illustrator whose work appears in publications globally. He writes and illustrates his own picture books for children as well as illustrating for a wide range of authors. When not chained to his computer he enjoys playing tennis badly, watching reruns of Bewitched and eating cake. His most recent book is The Robot's Pet by Nigel Gray, published by Koala Books.