Home>Browse>Books>Children's>British Museum: So You Think You've Got It Bad? A Kid's Life in Ancient Egypt

British Museum: So You Think You've Got It Bad? A Kid's Life in Ancient Egypt 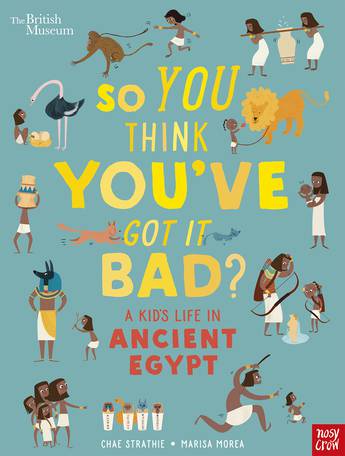 A kid's life in ancient Egypt might sound like fun with all the cool pyramids and glorious sunny weather, but actually it was rather tough! In this hilarious book, written by award-winning author Chae Strathie, children will learn exactly how difficult life really was, from dodging Deathstalker scorpions and cleaning up cow dung, to fetching water from the well and being slammed in the stocks for being naughty at school! Probably the first book about ancient Egypt that involves bubble wrap and skateboards!
More books by this author More books in this series

Chae Strathie is an award-winning children's author and journalist who grew up in a tiny village surrounded by a forest in Scotland, which probably explains a lot. His first attempt at professional writing was creating a Star Wars comic at the age of seven. He sold two copies and made a total of four pence. A regular at major book festivals, Chae has toured the length and breadth of the UK and visited schools as far afield as Romania, reading his stories, acting the goat and singing silly songs about worm ice cream and beard-growing. He lives in Dundee with his wife, three annoying cats and a very old goldfish called Lazarus.

Marisa Morea is a freelance illustrator based in Madrid, Spain. She lived in Barcelona for a couple of years and she graduated in a MA Illustration at Eina School in Barcelona in 2009. After a few years working as an Art Director in several advertising agencies, Marisa decided to quit and try as a full-time illustrator. So far, she's worked with many international clients from the United States, Australia, UK, France and Singapore.
In her spare time, Marisa is an Asthanga yogi and a classic cinema lover. She also goes crazy for music and enjoys creating covers of her favourite songs on the guitar.