Home>Browse>Books>Children's>Enola Holmes (Netflix tie-in): The Case of the Missing Marquess

Enola Holmes (Netflix tie-in): The Case of the Missing Marquess 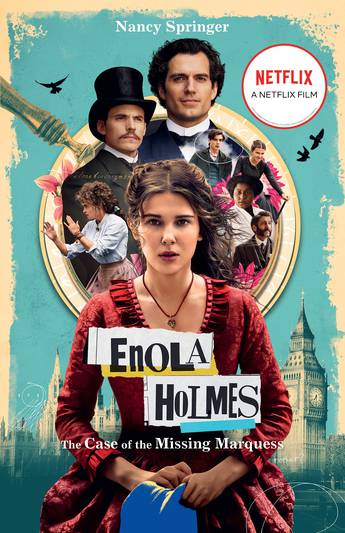 Now a Netflix film starring Millie Bobby Brown and Henry Cavill with a screenplay by Jack Thorne (Harry Potter and the Cursed Child). Upon the disappearance of their mother, Enola Holmes, the child sister of Sherlock and Mycroft Holmes runs away to become a fugitive private detective herself.

When Enola Holmes, sister to the detective Sherlock Holmes, discovers her mother has disappeared, she quickly embarks on a journey to London in search of her. But nothing can prepare her for what awaits. Because when she arrives, she finds herself involved in the kidnapping of a young marquess, fleeing murderous villains, and trying to elude her shrewd older brothers--all while attempting to piece together clues to her mother's strange disappearance. Amid all the mayhem, will Enola be able to decode the necessary clues and find her mother?
More books by this author

Nancy Springer has published forty novels for adults, young adults and children. In a career beginning shortly after she graduated from Gettysburg College in 1970, Springer wrote for ten years in the imaginary realms of mythological fantasy, then ventured on to contemporary fantasy, magical realism, and women's fiction and suspense before turning her attention to children's literature. Her novels and stories for middle-grade and young adults range from contemporary realism, mystery/crime, and fantasy to her critically acclaimed novels based on the Arthurian mythos, I Am Mordred: A Tale of Camelot and I Am Morgan Le Fay. Springer's children's books have won her two Edgar Allan Poe awards, a Carolyn W. Field award, various Children's Choice honors and numerous ALA Best Book listings. Her most recent series include the Tales of Rowan Hood, featuring Robin Hood's daughter, and the Enola Holmes mysteries, starring the much younger sister of Sherlock Holmes.