Home>Browse>Books>Children's>Escape to the Moon Islands: Quest of the Sunfish 1

Escape to the Moon Islands: Quest of the Sunfish 1 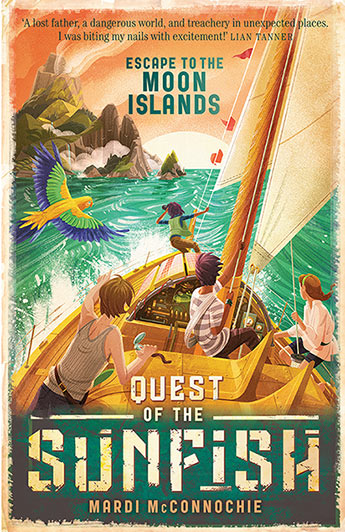 Twins Annalie and Will are sailing halfway across the world to find their missing father, while trying to evade the all-powerful Admiralty that governs their world in this highly original nautical adventure story with a speculative fiction twist.

When Will and Annalie's father disappears, they set out on a perilous sea voyage to find him. The motley crew of runaways put their faith in each other, and in a small sailing boat called the Sunfish. In a world transformed by a catastrophic Flood, they embark on an adventure that will test their ingenuity - and their friendship - to the limits.

The crew face off against storms and pirates, but the biggest threat of all comes from the Admiralty, the all-powerful navy that rules the oceans of the world. The Admiralty are supposed to be the good guys, but the deeper the Sunfish voyages into the Moon Islands, the more they realise that nothing is what it seems.
More books by this author

Mardi McConnochie is the author of four adult novels: Coldwater, which was shortlisted for the Commonwealth Writer's Prize First Novel Award (Pacific region), The Snow Queen, Fivestar and The Voyagers. She has also written two novels for younger readers, Melissa, Queen of Evil, winner of an Aurealis Award; and Dangerous Games. Her TV scriptwriting credits include 'Home and Away', 'McLeod's Daughters', 'Always Greener' and 'Pacific Drive'. She lives in Sydney with her partner, James Bradley, and their two daughters.