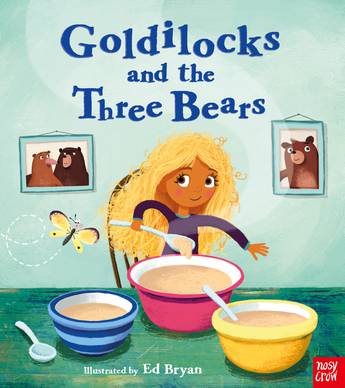 When Goldilocks gets lost in the woods, she finds herself at a cosy little cottage. She is delighted to find three bowls of porridge on the table, three chairs in the living room and some very bouncy beds in the bedroom. But little does Goldilocks know, this cottage belongs to three bears, and they're on their way back home . . .
More books by this author More books in this series

Edward is the illustrator of one of Nosy Crow's first apps, 3-D Fairy Tales: The Three Little Pigs. Ever since his art teacher told Edward's parents that their son blossomed in the art room, Edward has followed an artistic path, studying industrial design and working as a 3D artist, animator, and illustrator. He likes nothing better than making up stuff and colouring it in, and is super-excited about having the chance to illustrate such a popular children's story. Edward grew up in Suffolk, in a house full of home computers and pencils. He now lives in the Midlands with his wife, two children, three trolls, four giant land snails, and too many books.