Home>Browse>Books>Children's>Fizz and the Handbag Dognapper: Fizz 4

Fizz and the Handbag Dognapper: Fizz 4 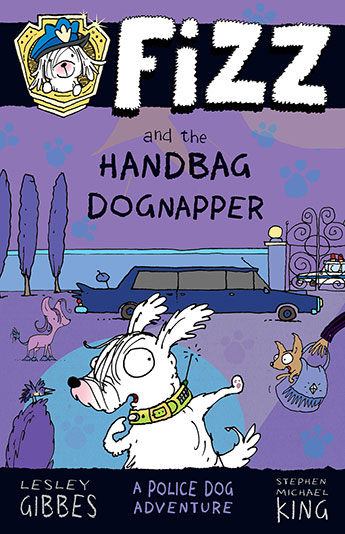 In Book Four of this hilarious and action-packed series for newly confident readers, can Fizz find a way to save himself and his sister from the clutches of the Handbag Kidnapper in his most dangerous case yet?

Fizz has solved his first real case as an undercover police dog, but his next assignment is about to get personal. Two handbag dogs have been kidnapped at red-carpet events in Sunnyvale City, and now there's another victim: Fizz's sister Crystal! Sergeant Stern sends Fizz, Remi and Amadeus undercover as dog models at the spectacular Shrill Alarm Collar launch. And in order to catch the culprit in the act, Fizz is going to be the bait!
More books by this author More books in this series

Lesley Gibbes grew up on Sydney's Northern Beaches and in Wagga Wagga, in country NSW. She was a primary school teacher for sixteen years before becoming a children's book author. Lesley has a passion for dance and was a ballroom performer at the 2000 Sydney Olympics. Today she spends her time writing, reading and mucking about with her family and her naughty Jack Russell Terriers, who were the inspiration for Fizz.

Stephen Michael King has illustrated, written and designed many splendid books for children, including Milli, Jack and the Dancing Cat, Bella's Bad Hair Day and Snail and Turtle are Friends. His first picture book with Lesley Gibbes, Scary Night, was awarded Honour Book: Early Childhood Book of the Year 2015 by the Children's Book Council of Australia.

Fizz is now a grown up dog, no longer a puppy, and he is very determined that he wants to be a brave, clever, fast police dog. The only problem is that he is not a German Shepherd – he’s a small cute ball of white, fizzy, fuzzy fur! Not exactly the right look for a police dog. In fact, he’s a Bolognese and comes from a long line of champion show dogs and is expected to follow the family tradition. Or at the very least a lapdog, a handbag dog or a companion dog like his brothers and sisters.

But Fizz is determined, even more so when his friend Tom tells him it’s not the size of the dog in the fight but the size of the fight in the dog and shows him an advertisement for the upcoming police dog tryouts. All Fizz has to do was show up and pass three tests. But when he arrives at the police station he is somewhat daunted for there are many dogs waiting and all of them much bigger. His courage and confidence take a deep dive when Amadeus who comes from a long line of police dogs and who has been practising for a long time, arrives with his ‘henchmen’ and starts to bully him and suggests he goes to the Miss Fluffy Puppy tryouts, Fizz really starts to worry and doubt. But from deep within, his determination rises and he stands up to Amadeus and refuses to give in.

And so the day begins, with Amadeus bullying Fizz at every opportunity trying to prove that he will be the next City Police Dog, not some little thing that looks like a powder puff. First up is the Bark Test, then the Scare Test and then the Chase-and-Catch Test. How will Fizz ever compete against all those other dogs? But being a police dog isn’t all about being the fiercest, angriest, loudest dog in the pack – it’s about being smart and fearless and resilient. But sometimes even that’s not enough. Amadeus becomes the City Police Dog and Fizz becomes…

This is a new series for younger almost-independent readers that will have wide appeal to those who like animal stories, adventure and fun. There are now four in the series which follow Fizz through his Academy training to become a dog detective and on to his first cases, one of which involves his sister Crystal. With short chapters and such an engaging character, the text demonstrates the author’s long experience as a primary school teacher as well as the owner of some feisty little dogs (who may have wanted to be police dogs too). Stephen Michael King’s illustrations are the perfect accompaniment – who wouldn’t quiver in the face of Amadeus? You need to look what happens when you line the spines up in order! Clever!

Series offer many benefits for readers – not the least of which is encouraging the child to keep reading – and to find one that is so appealing to both boys and girls and is well written and appropriately illustrated is gold. The test for me is whether I can hear myself reading it aloud to children as I read it silently to myself, and this definitely met that criterion. Now to find some kids to share it with…
Barbara Braxton, Teacher Librarian, NSW

These first two books in a new series, Fizz the Police Dog, will be lapped up by junior adventurers, especially those keen on dogs. Providing an exciting story, in which the underdog triumphs, each book is presented in the popular “chapter book” format, with 8 fast-paced chapters that will capture and hold the imagination and interest of youngsters. Fizz, the unlikely hero, overcomes the bullying tactics of the bigger applicants for the honour of joining the police dog academy and at the end of the second book he graduates as joint Top Dog, ready for work as an undercover police dog.

Fizz is delighted to have Sergeant Stern, and Tom the grounds-keeper at the Sunnyvale Boarding House for Dogs, who’s known him since he was a pup, from Book 1 as familiar figures at the Training Academy in Book 2, and of course he comes up against his old nemesis Amadeus. The books are not a serial however, and can stand alone if necessary.

Stephen Michael King’s personable illustrations well complement Lesley Gibbes’ well-paced text and their black-and-white outlines may well call for some colouring-in in personally owned copies! Well-designed pages with large font text make these very accessible stories. These books should be very popular with both girls and boys — there are female and male dogs as key characters — in the K-3 years. I’m just not sure that four in the series will be enough! Highly recommended.
Julie Davies

Primary school students will enjoy the book, Fizz and the Police Dog Tryouts as well as many adults. Fizz is a small, fluffy dog and very persistent which is a great quality to have as he shows us that if you believe in something and won't allow obstacles to bother you, positive outcomes can be achieved.

This book can be used by teachers for many lessons. Amadeus is an example of a bully who picks on Fizz who is the smallest dog trying out to become a police dog. Questions can be asked for students to provide examples of how Amadeus bullies and intimidates Fizz and some of the other dogs.

How does Fizz overcome this? Does he let it bother him?
Why do you think Amadeus behaves in this manner?
Why does he pick on Fizz?
How did Fizz react when Amadeus called him names?

The story contains lots of compound words, great adjectives, many quotation marks and lots of proper nouns which can be used for Literacy lessons.
Mary-Anne Pontikis, VIC

In Fizz and the Police Dog Tryouts, number one in the new Fizz the Police Dog series, the reader is introduced to Fizz. Fizz is a small, fluffy white dog who has an improbably dream to one day be a police dog. So when he sees the advertisement for the police dog tryouts he sneaks out of the boarding house for dogs and joins the long line of dogs for the trials. There he meets his nemesis, Amadeus, the biggest nastiest dog Fizz had ever met. To win the tryouts and become a police dog the dogs had to pass three tests: The Bark Test, the Scare Test and the Chase-and-Catch Test.
Fizz does extremely well in all the tests by Amadeus beats him in the end. He is however recognized as a perfect undercover police dog.

In the second book in the series, Fizz and the Dog Academy Rescue, Fizz is off to the Police Dog Academy but while he is there mysterious events are causing a large numbers of dogs to be eliminated from the training. So, as part of his training Fizz and his new friend Remi are given an extra challenge to find out who is behind these nasty incidences.

Fizz the Police Dog will be a great series for students in year 2 and 3 who are becoming independent readers. The storylines are interesting and Stephen Michael King’s trademark amusing cartoon illustrations will keep the children entertained. They will be a fun addition to classes who are looking at community workers such as the police and a visit from a police dog would be a great extension. Also when exploring different genres, Fizz and the Dog Academy Rescue would be a good example of a mystery.
Margy Heuschele, Teacher Librarian, Concordia Lutheran College, QLD

It’s hard to describe this book as anything but 'cute'. A fun story about a pup destined for the life of a show dog, yet he dreams of doing something more; he dreams of becoming a police dog. He doesn’t look the part and he doesn’t have the physique for the demands of police work – it seems impossible, but he has to try.

An entertaining story of overcoming against the odds and finding surprising ways of succeeding, even against the bullies! This younger reader’s chapter book – the first in the series - has much to commend it, with lots of relationship scenarios that children can identify with, and delightful illustrations by Stephen Michael King. Grade 3-4 students and independent Grade 2 readers would find it a joy, and our library will purchase the rest of the series to encourage them along. The series fits nicely between other younger reader’s series such as Zac Power and the Mr Badger series by Leigh Hobbs. It could make an amusing read-a-loud class story, inspiring children to read the other books in the series for themselves.

As a taster, book 2 – Fizz and the Dog Academy Rescue - sees our hero face his next series of tests. Can he succeed and achieve his dream of becoming a fully-fledged police dog, and solve his first case, or will the bully, Amadeus win out?
Debbie Williams, Library Technician, Mountain District Christian School, VIC

Fizz looks like a warm, fluffy slipper but has a dream to become a police dog. His family are very discouraging and suggest he become a handbag dog or a show dog. But Fizz is determined to pursue his dreams and, with some encouragement from a human friend, attends the police dog trials. He passes all the tests until the last one where Fizz is required to take down a burglar. Unfortunately, though Fizz has the determination, he hasn’t got the weight to bring the burglar down and fails the last test. However, Fizz is told he would make a great undercover police dog.

This book is 63 pages long and illustrated with black and white cartoon- type pictures. It would be an ideal book for children aged six to nine years who are just beginning to read chapter books.
I would use this book as a read-aloud and as a hook to get children reading the others in the series. There are a lot of discussion starters in this story: ‘follow your dreams’, ‘do appearances matter’, and ‘everyone has something they are good at and will be able to do’.
Nova Gibson, Librarian, Massey Primary School, NZ