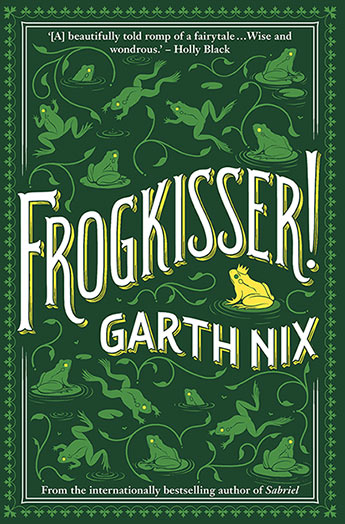 A rollicking fantasy-adventure by the master of children's speculative fiction.

Talking dogs. Mischievous wizards. An evil stepstepfather. Loads and loads of toads. Such is the life of a Frogkisser.

Princess Anya needs to see a wizard about a frog. It's not her frog, it's her sister's. And it's not a frog, it's actually a prince. A prince who was once in love with Anya's sister, but has now been turned into a frog by their evil stepstepfather. And Anya has made a 'sister promise' that she will find a way to return Prince Denholm to human form...

So begins an exciting, hilarious, irreverent quest through the Kingdom of Trallonia and out the other side, in a fantastical tale for all ages, full of laughs and danger, surprises and delights, and an immense population of frogs.

'[A] beautifully told romp of a fairy tale ... Wise and wondrous.' - Holly Black
More books by this author

GARTH NIX was born in 1963 in Melbourne, Australia. A full-time writer since 2001, he previously worked as a literary agent, marketing consultant, book editor, book publicist, book sales representative, bookseller, and as a part-time soldier in the Australian Army Reserve. Garth's books include the award-winning young adult fantasy novels Sabriel, Lirael, Abhorsen and Clariel; the dystopian novel Shade's Children; and the space opera A Confusion of Princes. His fantasy novels for children include The Ragwitch; the six books of the Seventh Tower sequence; the Keys to the Kingdom series; and the Troubletwisters series and Spirit Animals: Blood Ties (co-written with Sean Williams). More than five million copies of his books have been sold around the world, his books have appeared on the bestseller lists of the New York Times, Publishers Weekly, the Times and The Australian, and his work has been translated into more than forty-one languages. He lives in a Sydney beach suburb with his wife and two children.