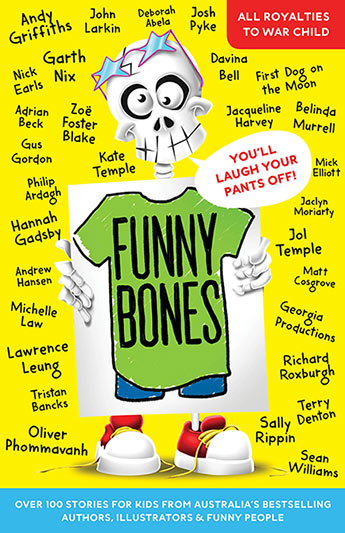 A bumper book to tickle your funny bone with over 100 hilarious one-liners, jokes, shaggy dog tales as well as silly stories and wise-cracking cartoons from Australia's favourite comedians, children's authors and illustrators, that raises money for War Child Australia.

If you think you've heard every funny story there is then think again … Funny Bones is a super-huge collection of rib-tickling stories, cartoons, comics, jokes and much, much more that's bound to get even the most serious kid laughing.

Kate and Jol Temple write funny books for kids. Their award-winning book Captain Jimmy Cook Discovers Third Grade was selected as a CBCA Honour Book and inspired the ridiculous spin-off, Yours Troolie, Alice Toolie. Kate and Jol are ambassadors for Raising Literacy Australia. Oliver Phommavanh loves to make people laugh on stage as a comedian, and on the page as a children's author of books such as Thai-riffic!, Con-nerd and Natural Born Loser.

War Child is an international relief and development agency dedicated to providing immediate, effective and sustainable aid to children affected by war. War Child was formed in 1993 in response to conflict in the former Yugoslavia, and has since expanded its work to conflicts worldwide. War Child Australia is an all-volunteer organisation that was established in July 2002. Since that time, War Child Australia has been committed to providing aid to young victims of war all around the world.