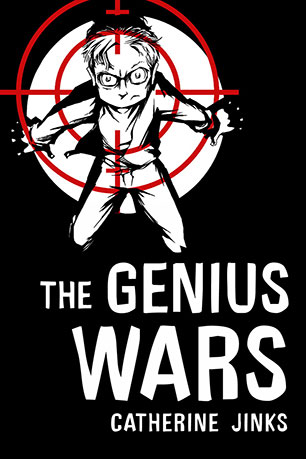 Will Cadel be able to track down Prosper English before any more of his friends and family are hurt? Sinister, scary and satisfying, this is the conclusion to the thrilling, high-tech trilogy that began with Evil Genius and continued with Genius Squad.

In a thrilling conclusion to the Genius trilogy, Cadel must think like a criminal mastermind.

After abandoning a life of lies and mistrust, fifteen-year-old Cadel has finally found his niche. He has a proper home, good friends and loving parents. He's even studying at university.

But he's still not safe from Prosper English, who's now a fugitive from justice and determined to smash everything that Cadel has struggled to build. When Cadel's nearest and dearest are threatened, he must launch an all-out attack on the man he once viewed as his father.

Can he track down Prosper before it's too late? And what rules will they both have to break in the process?
More books by this author More books in this series

Catherine writes whenever she gets a moment and could write for eight hours straight if she had the chance. She lives in the Blue Mountains in NSW and gets her ideas from everywhere, particularly good science fiction films. The author of many award-winning, popular books for children and adults, her books include Evil Genius, Genius Squad, Pagan's Daughter, and, most recently, The Reformed Vampire Support Group.