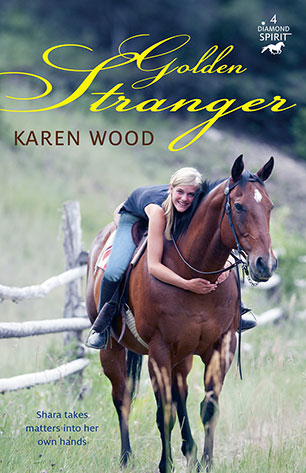 In this fourth book in the warm-hearted Diamond Spirit series, Shara and her friends decide to protest against the wild horse race that has come to town.

Shara heard her father's four-wheel drive back up to the horse float, and moments later the sounds of hooves up a tailgate. She rushed to the window and saw Rocko's big brown rump move into the float next to Goldie's.

When Shara and her friends decide to protest against a wild horse race, it sounds fun, even heroic, but they don't plan on the tangle of heartbreak that follows. The police are on her doorstep, her friend Corey is in hospital and both her beloved horses have been taken from her. Shara will need the whole town on her side before she can put things right.

Karen Wood has been involved with horses for most of her life. Her most special horse is a little chestnut gelding called Reo. She is married with two children and lives on the Central Coast, New South Wales.

In Golden Stranger, Shara and her friends manage to stop the wild horse race at the show going ahead, but the train of events that follows is not quite what they expected. While everyone seems to agree that the race is cruel, and that the contractors treat their animals inhumanely, no-one is impressed by the way the race was stopped, including Shara's parents when they realise that she was involved.

In this book, the fourth in a series with Shara and her friends, Karen Wood has woven a tale of adventure and suspense, with a little bit of rebellion, combined with a powerful mix of friendship, horses, and awakening romance. The story is well paced, and while there is a lot of action to keep the reader interested, the message is clear, and the friends learn the hard way that their decisions have consequences that they had not considered. Golden Stranger raises issues of ethics and morality. Shara and her friends are making a stand against cruelty, but have they gone about it the right way? Readers will quickly sympathise with the group's moral stand, agreeing with their decision to sabotage the race, and be outraged by the way the adults react when they take further steps to make sure the contractors get what they deserve, but are they now acting out of a sense of justice, or are they just being selfish?

In the classroom (Years 5 - 8), this would provide a good point to pause for discussion. Some students would be firmly behind the friends, effectively arguing that the end justifies the means, while others would recognise that although the friends' actions might be morally correct, they are not behaving ethically. The consequences of their actions seem insurmountable. One person has been injured, and all the friends now face heartbreaking outcomes. The reader can join Shara in assuming one of two positions, indignation or remorse, and Shara works her way through both. The moral viewpoint remains, but an ethical solution is found, and the reader is left satisfied, enlightened, and, most importantly, entertained.
Cate Whittle, ACT