Home>Browse>Books>Children's>Golden Unicorn: Rise of the Mythix 1

Golden Unicorn: Rise of the Mythix 1 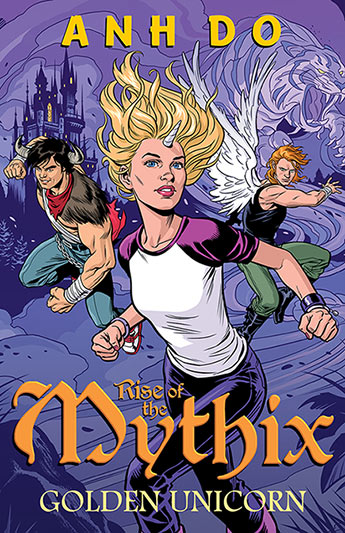 An epic new universe of adventure from best-selling author Anh Do.

Some heroes are legends. Some legends are real.

The tyrant known as the Soul Collector hunts down anything that is beautiful, unusual or unique.

Kelly Swift is trying hard to be an average teenager, to fit in. But every day her powers are growing: she can run faster than the wind, she can hear people's thoughts, she is not normal.

When her mother is taken by the Soul Collector, Kelly can't linger in the shadows any longer. But who is she really? Can she be the one in the prophecy? Is she...the Golden Unicorn?

The Golden Unicorn, the Minotaur and the Griffin -
Only these three united to a common purpose
can fell him who seeks to triumph over all…
More books by this author More books in this series

Anh Do is one of Australia's best-loved storytellers. His junior fiction series WeirDo, Hotdog! and Ninja Kid are adored by millions of kids around the country, having sold in excess of 2.5 million books.

In his new series Wolf Girl and Rise of the Mythix, Anh brings his talent for break-neck plots and brilliant, relatable characters to a slightly older audience.

Chris Wahl is an award-winning Australian illustrator and comic artist whose list of clients include Marvel, The Phantom, MAD magazine, Titan Comics, Lucasfilm and Hasbro.

Golden Unicorn: Rise of the... by Allen & Unwin on Scribd