Home>Browse>Books>Children's>Good Enough for a Sheep Station

Good Enough for a Sheep Station 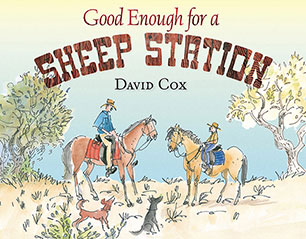 Completing the trilogy that began with The Road to Goonong and continued with The Fair Dinkum War, David Cox explores his relationship with his father and his life as a stockman on a sheep station. His warm observations in words and pictures reveal a resilient quintessential Australian spirit.

As a boy, David Cox lived in the dusty outback on a sheep station. His lessons came in a brown envelope from the Correspondence School, but out of doors his father was his teacher. David learned the stockman's skills of riding horses and mustering sheep and cattle, and when they were out riding his father would tell stories about old times. Sometimes they would repair stockyards or fences, and when the job was done his father would step back and say, 'Well, it's good enough for a sheep station.'

David Cox concludes the moving story of his country childhood that began with The Road to Goonong and continued with The Fair Dinkum War.

'I have always loved David Cox's work. Every opening is full of action and humour . In good times and bad the warmth and love of the family shine through' Magpies

'Charming and touching.What a lovely way for children to learn about life in the outback a long time ago.' Good Reading
More books by this author More books in this series

David Cox was born and reared in country Queensland. When he left school, he worked for five years as a jackaroo on outback sheep and cattle stations. At age twenty-one, he went to London and enrolled at St Martin's School of Art. He stayed in Europe for eight years, spending time in France and Spain. Back in Australia, he worked as an artist in the newspaper industry, while illustrating children's books with texts by other writers as well as his own picture books. In 2007 he was awarded the Dame Isabelle Rankin Award for distinguished services to Children's Literature in Queensland.

David has been a full time freelance writer/illustrator for the last twenty-four years, working from his home studio in Brisbane. One of his hobbies is singing. He is coached by his wife, pianist/composer, Betty Beath, Betty and David have written music theatre pieces about St Francis of Assisi and David regularly acts as cantor at St Phillips Church, which is attached to a Franciscan friary.