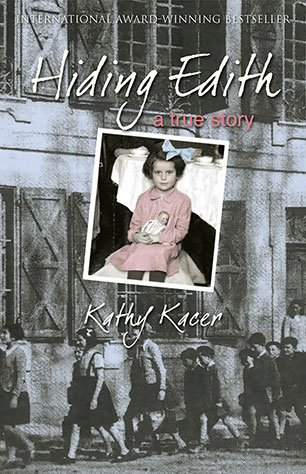 The remarkable true story of Edith Schwalb, kept safe due to the courage of an entire village in France during the Nazi invasion in WWII.

In 1938, Edith and her family joined the many Jewish people forced to leave their homes to escape the Nazis. In a desperate bid for survival, Edith was entrusted to the care of a children's home in Moissac, France, where other Jewish children were hiding. All the people of the town promised to keep the children's identity a secret. Could they possibly succeed? Would Edith ever see her family again?

A dramatic and moving account of one girl's experience during World War II.

This is the true story of Edith Schwalb.
More books by this author

Kathy Kacer has won many awards for her writing, including the Silver Birch, the Red Maple, the Hackmatack and the Jewish Book Award. In 1999 she wrote her first book in Second Story's Holocaust Remembrance Series for Young Readers, The Secret of Gabi's Dresser.

Since then she has penned five other books for the series: The Underground Reporters, Clara's War, The Night Spies, Hiding Edith, and The Diary of Laura's Twin. Her first adult book is the non-fiction Restitution: A family's fight for their heritage lost in the Holocaust.The rights to her books have been sold to many countries, including Germany, China, Italy, Thailand, England, Japan, and Slovenia. She has adapted The Secret of Gabi's Dresser into a successful play. A former psychologist who worked with troubled teens, Kathy now writes about the Holocaust for young readers and travels the country speaking about it. She also addresses adults about how to teach sensitive material to young children. Kathy lives in Toronto with her family.