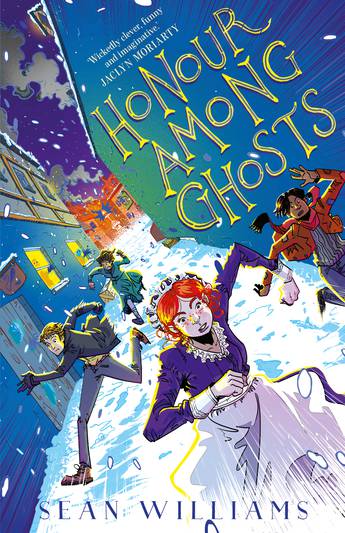 A suspenseful middle-grade fantasy full of mystery, twists and skulduggery from the author of the critically acclaimed Her Perilous Mansion.

When Athelbert Fan is thrown in jail for thievery, his daughter, Penny, is convinced he has been framed. Someone else must have stolen the gold cup from the crabby magistrate's home and put it in with her father's tools. But who could it be? Setting out to prove his innocence, Penny forms an unlikely foursome with the magistrate's son, a young traveller and a magical scribe's apprentice. Soon they discover even more crimes - and it's always the rich being burgled and the poor being blamed. Before long the whole town is in uproar, until a mysterious inspector arrives … but can he be trusted? It's up to the young quartet to untangle the truth and put things right.
More books by this author

Sean Williams is a multi-award-winning, #1 New York Times best-selling author for readers of all ages. With over four million published words, in the form of series, novels, short stories and poems that have been translated into multiple languages for readers around the world, he has worked with visual artists, dramaturges, composers and other writers on collaborative works that include stories set in the Star Wars and Doctor Who universes, original series created with Garth Nix, and a science-fiction musical performed at the National Museum in Canberra.
In 2017, he was the recipient of the Australian Antarctica Division's annual Arts Fellowship. His most recent novels Impossible Music and Her Perilous Mansion were nominated for the Ethel Turner Prize for Young People's Literature and the Patricia Wrightson Prize for Children's Literature respectively. Both are Children's Book Council of Australia Notable Books.
As well as being a senior lecturer at Flinders University, he writes articles about creative writing; composes music that has been released internationally and commissioned for exhibitions, live performances, and the stage; and cooks a mean Brussels sprout.
seanwilliams.com