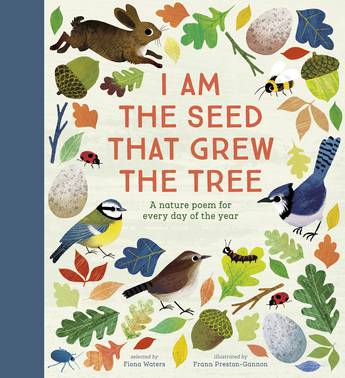 I Am the Seed That Grew the Tree, named after the first line of Judith Nicholls' poem 'Windsong', is a lavishly illustrated collection of 366 nature poems - one for every day of the year, including leap years. Filled with familiar favourites and new discoveries, written by a wide variety of poets, including John Agard, William Blake, Emily Bronte, Charles Causley, Walter de la Mare, Emily Dickinson, Carol Ann Duffy, Eleanor Farjeon, Robert Frost, Thomas Hardy, Roger McGough, Christina Rossetti, William Shakespeare, John Updike, William Wordsworth and many more, this is the perfect book for children (and grown-ups!) to share at the beginning or the end of the day, or just to dip into.
More books by this author More books in this series

Once upon a time long, long ago, Fiona Waters was born in Edinburgh and she has had her nose in a book ever since. When she was about seven she heard Gabriel Woolf reading The Lady of Shalott on the radio and from that moment she was hooked on poetry forever. Fiona has worked with children's books all her life as a bookseller, publisher, author, reviewer and latterly as the Editorial Director of Troubadour, choosing the books for book fairs in schools. Now retired, she has been travelling to all the fairytale places she dreamt of as a child, like Russia and Japan, reading even more books with her two cats and still very much enjoying compiling anthologies.

Frann's first picture book, The Journey Home, was published in 2012 and was shortlisted for both the Waterstones Children's Prize and the Cambridgeshire 'Read it Again' book Prize. In 2011, she became the first UK recipient of the 'Sendak Fellowship' and spent a month living with and learning from Maurice Sendak. She is one fifth of the design group Zombie Collective who specialize in workshops and pop-up galleries. They have worked with clients such as Tate Britain, the House of Illustration, the Design Museum, the British Library and UCL Hospital, creating workshops for both adults and children.