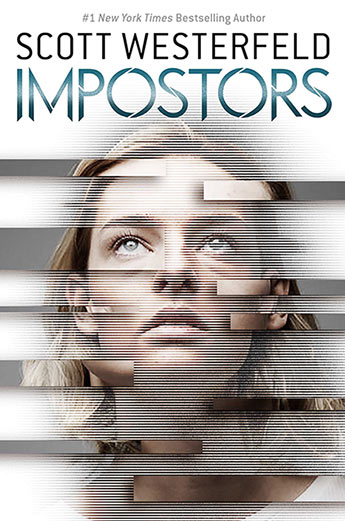 In a world full of social and military tech, power struggles, dictatorships, surveillance, intrigue and the ever-present threat of treachery, Frey is sent on a potentially deadly mission. Impostors is the first book in a new quartet - a thrilling return to the world of the New York Times bestselling Uglies series.

She's the body double for her twin sister Rafia - the precious heir of the first family of Shreve - and her existence is a closely guarded secret. So while Rafi was schooled in poise and diplomacy, Frey was drilled in weapons and combat. Her purpose: to protect her sister from their tyrannical father's many enemies.

When Frey is sent in Rafi's place as collateral in a precarious business deal, she becomes the perfect impostor - as elegant and charming as her sister. But Col Palafox, the son of a rival leader, is getting close enough to spot the killer inside her. As layers of deceit peel away, can Frey become her own person, and risk everything in a rebellion?

Master storyteller Scott Westerfeld returns with a brilliant new series set in the world of his bestselling Uglies series.
More books by this author More books in this series

Scott Westerfeld is best known as the author of the Uglies series, a number-one New York Times bestseller, and the Leviathan and Zeroes trilogies, both New York Times bestsellers. His standalone novels include So Yesterday, and Afterworlds. His other works include the Midnighters trilogy, the Peeps and Risen Empire duologies, and the eponymous first book of the Horizon multi-platform series. His novels have won the Philip K Dick Special Citation, the Aurelius Award (twice), the Victorian Premier's Literary Award, and have been named New York Times Notable Books and Best Books for Young Adults Top Ten Children's Books of the Year.

Scott co-wrote the Shay's Story Uglies-based graphic novels with Devin Grayson. He is also the author of the graphic novel Spill Zone, illustrated by Alex Puvilland.

Impostors by Scott Westerfe... by on Scribd