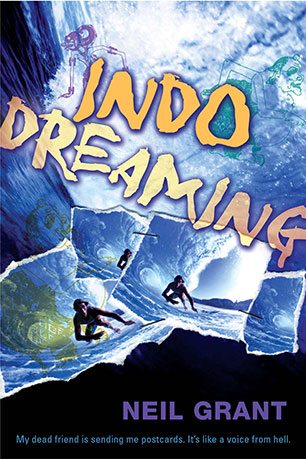 A surf odyssey that reveals a rarely seen glimpse of Indonesia and its people: funny, compassionate, angry, wild, clever. It's for anyone who has the spirit of travel wedged in their soul.

'My dead friend is sending me postcards. It's like a voice from hell.'

A week later the postcards started.

One a month - Indonesian breaks,

Goog's best mate Castro vanished into the Southern Ocean, but his body was never found.

So Goog flies north, chasing the ghost of his dead friend. He hooks up with Niagara - a young American hunting his own illusions - and together they set off on a wild, gritty surf odyssey. But are they actually at the mercy of an unseen puppet master, and what will the find in the surreal shadow-lands of Indonesia?

From the author of Rhino Chasers, Indo Dreaming is a vivid and enigmatic novel for anyone who has the spirit of travel wedged in their soul.

Grant's ear for speech is unerring Rhino Chasers is powerful and promising debut.' Australian Bookseller and Publisher
More books by this author

Neil Grant was born in Scotland in the year of the Fire Horse. He graduated from The International School of Kuala Lumpur in 1985 and spent a large part of his adult life travelling and working in a variety of jobs, including instrument steriliser, forklift driver, banana picker, dishwasher and brickie's labourer. He is a knee-boarder who needs to surf more often than he is able.

His long involvement with the ocean and the difficult business of struggling from boyhood to manhood (almost there) led him to write about these things. His first novel, Rhino Chasers, was published by Allen + Unwin in 2002.