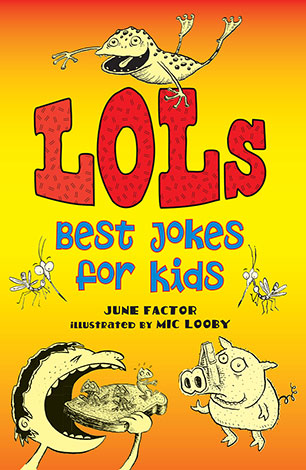 A classic book of jokes with funny drawings by Mic Looby.

Why do bulldogs have such flat noses? Because they keep chasing parked cars. What is a twip? A twip is what a wabbit takes when it wides on twains. What must you be careful not to do when it's raining cats and dogs? Step in a poodle.

June Factor is a writer and folklorist, best known for her collections Far Out, Brussel Sprout! and All Right, Vegemite! Mic Looby is a writer, editor, illustrator and cartoonist and lists his hobbies as chewing pens and humming softly.

June Factor was born in Poland and grew up in Australia, where she has been writing books and articles for a long time. She has a special interest in what children do when they are playing. That's why she has collected many of the rhymes, riddles, jokes and sayings that children use in their play and friendships. As everyone was once a child, this oral literature belongs to us all, but especially to children whose pleasure it is to play with words and ideas.

Mic Looby was born, after years of non-existence, in 1969 in Windsor, New South Wales. After doodling his way through school in Canberra and Melbourne, he accidentally earned a degree in journalism and went on to work as newspaper writer/ cartoonist/ illustrator in Australia and Hong Kong. Now he is a writer, editor and freelance illustrator.