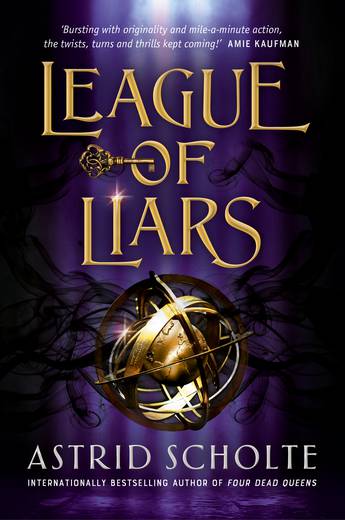 Four teenagers charged with the illegal use of magic get together to devise the ultimate jailbreak. A thrilling YA fantasy novel full of twists and turns, perfect for fans of Six of Crows and Shadow and Bone.

Shadows are dangerous. Edem is illegal. And liars are cowards.

Ever since his mother was killed in a freak edem-based crime, seventeen-year-old Cayder Broduck has had one goal: to have illegal users of extradimensional magic brought to justice. Cayder dreams of becoming a prosecutor and, when he secretly accepts an apprenticeship under the city's best public defender, he plans to learn every legal trick he can to one day dismantle defence arguments. Then he'll finally be able to make sure justice is served.

But when he meets all three criminals he is to defend, he finds they are teenagers, like him, and their stories are ... complicated, like his. As their cases unfold, Cayder must race to separate the truth from the lies and uncover what really happened the night his mother died

From the bestselling author of Four Dead Queens comes a heart-pounding mystery rife with secrets and danger, where nothing is as it seems...

'League of Liars is a thrilling page-turner with enough suspense to keep readers guessing right up until the very end!' - Lynette Noni, bestselling author of The Prison Healer

Astrid Scholte was raised on a diet of Spielberg, Lucas and Disney and knew she wanted to be surrounded by all things fantastical from a young age. She's spent the last fourteen years working in film, animation and television as both an artist and manager. Career highlights include working on James Cameron's Avatar, Steven Spielberg's The Adventures of Tintin and Disney's Moon Girl and Devil Dinosaur. She lives in Melbourne, Australia with her fiance and two cats, Lilo and Mickey. Her debut YA novel, Four Dead Queens, is an international bestseller and award winner.

A Special Message to Teachers and Librarians from the Author