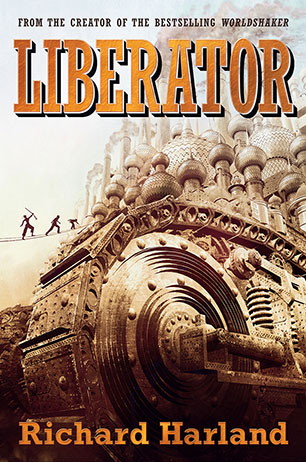 This brilliant sequel to Worldshaker follows the changed fortunes of Col and Riff as the juggernaut rolls on. Now the Filthies are in charge, and it's the Upper Decks people who are victimised and reduced to a ghetto-like existence.

The battle continues as the Filthies take over the juggernaut Worldshaker and rename it Liberator. A world of deception and betrayal ensues as the revolution turns radical. With Col now in the minority with his Swank friends, what will happen to his relationship with Riff, as they both face the reality of a world changing its shape forever?

'Harland has constructed a world with overtones of the Victorian era, when capitalism was at its most aggressive, and taken us hopefully to a brighter dawn.' Viewpoint

'Harland has created a wonderfully brooding world that is part Dickens, part steam-punk and will appeal to those twelve and up who like their fantasy a little on the dark side.' Readings Monthly
More books by this author

Richard Harland was born in England, but has spent most of his adult life in Australia. He had a period of writing songs and performing folk-rock music around Sydney, then became a lecturer in English at the University of Wollongong (1987-1997). In 1993, he published his first gothic fantasy, The Vicar of Morbing Vyle, which became a cult favourite. Since then, he has had 16 novels published, ranging from fantasy to science fiction to horror and from adult to YA to children's. He has won five Aurealis Awards, including the Golden Aurealis for Best Novel in any genre of SF, Fantasy or Horror.

His international breakthrough novel was the steampunk fantasy, Worldshaker, published in the US, UK, France, Germany and Brazil as well as Australia. The sequel, Liberator, has also been sold to a number of publishers overseas.

Richard's free 145-page guide to writing fantasy is at www.writingtips.com.au His website: www.richardharland.net .