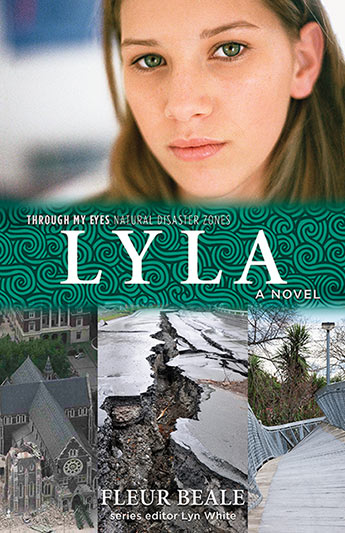 A gripping and personal story about one girl's experience of the 2011 Christchurch earthquake and its aftermath.

Lyla has just started her second year of high school when a magnitude 6.3 earthquake shakes Christchurch to pieces. Devastation is everywhere. While her police officer mother and trauma nurse father respond to the disaster, Lyla puts on a brave face, opening their home to neighbours and leading the community clean-up. But soon she discovers that it's not only familiar buildings and landscapes that have vanished - it's friends and acquaintances too. As the earth keeps shaking day after day, can Lyla find a way to cope with her new reality?
More books by this author More books in this series

Fleur Beale is the author of many award-winning books for children and young adults - she has now had more than 40 books published in New Zealand, as well as being published in the United States and England. Beale is the only writer to have twice won the Storylines Gaelyn Gordon Award for a Much-Loved Book: with Slide the Corner in 2007, and I Am Not Esther in 2009. She won the Esther Glen Award for distinguished contribution to children's literature for Juno Of Taris in the 2009 LIANZA Children's Book Awards. Fierce September won the YA category in the 2011 NZ Post Children's Book Awards and the LIANZA Young Adult Award in 2011. In 2012 she won the Margaret Mahy Medal for her outstanding contribution to children's writing, and in 2015 she was awarded the New Zealand Order of Merit for services to literature. In 1999, Beale was Dunedin College of Education's Writer in Residence. A former high-school teacher, Beale lives in Wellington.

Series editor and series creator Lyn White has extensive experience as a primary school teacher-librarian and EAL teacher and in 2010 completed postgraduate studies in Editing and Communications at the University of Melbourne. Lyn is passionate about children's literature and has great expertise in engaging students with quality texts. Her work with refugee children motivated her to create the acclaimed Through My Eyes series of books set in contemporary war zones. Lyn created and edited the Through My Eyes - Natural Disaster Zones series to pay tribute to the courage and resilience of children who are often the most vulnerable in post-disaster situations. Lyn continues to teach EAL and is an education consultant and conference presenter.

Told through the eyes of a 13-year-old girl, Lyla takes the reader on a journey through life, before, during and after a huge earthquake devastates Christchurch in New Zealand in 2011.

It is written very much in the style and language of a teenager and has a great focus on the things that would be most important to a young person in this situation. It also weaves a background story around a love/hate relationship with a young man who lives in the same street as Lyla. It is, in a way, a coming of age story.

What stands out most about this book is the relevant (true) information added at the end of the book, taking it from simply a story, to a useful, factual text that could have many uses in the HASS and Science Curriculum. Information such as a detailed and informative earthquake timeline, relevant websites about the actual earthquakes, and a glossary of colloquialisms and indigenous terms from New Zealand mean this book could be used for research and information purposes as well as to entertain.

This book would be best suited to capable Grade Six students up to around Grade Ten. As it is told from the point of view of a young female teenager, it would most probably be of interest to girls.
Francesca Massey, Exeter Primary School, TAS

“It’s never going to stop. We’re going to die. Stop. Please. Just stop. But the ground didn’t listen to prayers or pleas or screams…” The continued threat of aftershocks and the inability to learn the fate of loved ones catalyses the sense of chaos in Lyla’s young life.

Fleur Beale’s fictional account of an adolescent girl’s survival of the 2011 Christchurch earthquake and its aftermath will captivate readers intent on reading tales of survival. Lyla is in her second year of high school and excited to be celebrating her mother’s birthday in a posh local restaurant situated in the heart of Christchurch when a magnitude 6.3 earthquake hits. Despite being separated from her family and friends, this courageous protagonist returns to her semi-functioning home and turns it into a safe zone for those living nearby. Lyla bravely navigates collapsing buildings and liquefaction to aid the injured and offer comfort and support to those in need whilst also struggling through own mental trauma.

Lyla would work extremely well within a unit that explores themes such as survival, adversity, resilience and hope. The novel is rich in figurative language that vividly captures the devastated setting of Christchurch and transformation of well-rounded characters. The language and themes of the novel are accessible to ideally Stage 4 (Years 7-8) students who could interpret how meaning is created in an engaging way through an analytical study. Students could also develop their creative writing skills using the novel as a basis to explore how an event can be described in a holistic way; the physical devastation, spiritual decline, emotional trauma and mental instability all captured in the experiences of Lyla.

Beale has created a sensitive portrayal of how great loss can be overcome with perseverance and time. Readers will be hooked until the end and will truly admire the tenacity of individuals and the community during times of crisis.
Eufemia Mellas, Parramatta High School, NSW

I enjoyed reading this fictional account of the earthquake that hit Christchurch (NZ) in February 2011, told from the perspective of a teenage girl – Lyla. Fleur Beale’s skill in telling this story through Lyla’s eyes at times brought me close to tears. Beale’s talent created vivid pictures in my mind of Lyla’s poignant narrative of the devastation.

Lyla is at the outset a pretty together teen who attends a girls’ school with an historical family connection. She is haunted by the September 2010 quake, and pleads with Rūaumoko, the Maori god of earthquakes, to stop with the frequent aftershocks which are still happening months later. But Rūaumoko is not listening, and we journey with Lyla and her family and friends through the quake of February 2011, its resulting ruin, loss of life, and traumatic aftershocks.

The attention to detail is apparent as one reads not only the factual information around the story’s centre, but the feelings and reactions of the people who lived through it; not knowing if loved ones are safe, the obliteration of property, the loss of loved ones, some losing all they had known. This is skilfully brought to life via the people in Lyla’s life. Out of the initial tragedy, we find also people reacting strangely at times as they gradually find ways of coping - part of the human condition in such circumstances. And Lyla is no slouch – stepping in to help those in need as she came across them. Lyla herself becomes an unwitting victim of this quake, and has to deal with her own reactions and mental health. Beale treats this sensitively and our protagonist is able to find hope in a world where Rūaumoko is restless.

Fleur Beale’s novel Lyla is an engaging read that takes us to Christchurch NZ during the 2011 earthquake disaster.

Through Lyla’s story, readers discover what it is like to live in an earthquake prone area through a major disaster and its aftermath. We experience her fear and the devastation as people she knows are unaccounted for and familiar surroundings are destroyed; We are taken along for the ride as she finds courage and fortitude in helping with the clean-up and recovery process; and we empathise with her as she deals with complex emotional issues.

Beale paints vivid images of Christchurch and its surrounding suburbs during the 2011 earthquake which led me to reflect on my own experience seeing the city’s destruction on the news from the safety of my home in Australia.

I enjoyed reading this book. It is an accessible text and easy to read and would be a fantastic text choice for students in years 7-9. Its audience would be quite varied. There is just enough action and suspense to keep you interested and as Lyla is set in a real-life situation, it has you question what your own reaction would be. It would be a great addition to a unit of work on disasters or telling stories. It is an excellent example of historical fiction and a solid addition to your school library or book room.
Kate Fitzsimmons, The Forest High School, NSW

Lyla Through My Eyes - Natural Disaster Zones by Fleur Beale, Edited by Lyn White_extract by Allen & Unwin on Scribd