Home>Browse>Books>Children's>Marge The Collection: 9 stories in 1

Marge The Collection: 9 stories in 1 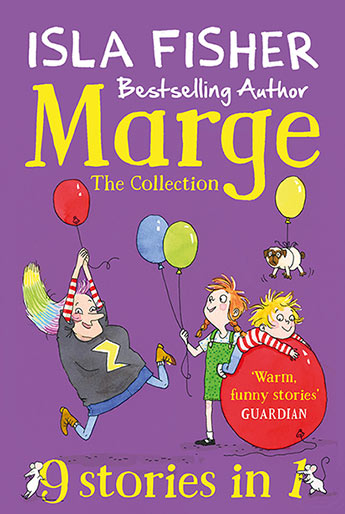 Have you met Marge? She has rainbow hair, tells wild stories and she's the best babysitter in the whole world.

MARGE, MARGE AND MORE MARGE is a bumper edition containing the first three books in the bestselling MARGE IN CHARGE series.

Isla Fisher began acting as a child and has worked solidly in television and film for the past 25 years. She has appeared in Home And Away, The Great Gatsby and Definitely Maybe, to name a few. Isla has played many roles over the years, from a bonkers bridesmaid in Wedding Crashers to the poster girl for consumerism in Confessions Of A Shopaholic. But her favourite role has been being a mummy to daughters Olive and Elula and son Monty. Isla has been making up stories at bedtime for them every night since they were born. These books are for her children, as a reminder of all the fun they have at bedtime reading books and sharing stories.

Eglantine Ceulemans spent her childhood reading Belgian comics. In 2007 she joined the Emile Cohl School of Art in Lyon, France, transforming her passion for illustration into a vocation. She loves working in an intuitive way, combining humor and sensitivity, and using different mediums and techniques. Eglantine currently resides in Lyon.