Home>Browse>Books>Children's>Milli Jack and the Dancing Cat

Milli Jack and the Dancing Cat 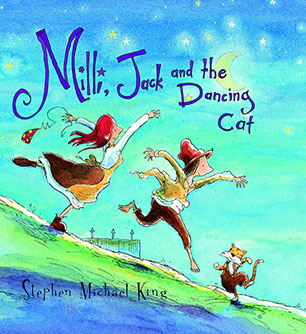 Paperback edition of a CBC Honour picture book - full of joyful colour and energy - about a timid girl who finds the courage to live life on her own terms, with the help of a travelling minstrel and his dancing cat.

Milli could take a thing that was a nothing and turn it into a something. She could find any old forgotten this or that, give it a bit of a wiggle, and transform it into something amazing. But no one in her town valued what Milli could do, and she was far too shy to insist. No one ever wanted anything special. So Milli spent her time making brown shoes, black shoes and plain old work boots.

But then comes the day two vagabonds roll into town - crazy Jack and his dancing cat. Sturdy new boots are exactly what they need, but what can they give Milli in exchange? Dancing lessons! So they teach her jazz and ballet and tap. They do the two-step, the three-step and the tricky-twisting-backward-slide-four-step. And Milli begins to feel brave and free. So she makes them the most beautiful shoes she can imagine. She rustles up a few amazing things for herself, too. And eventually even the townspeople have to take notice.
More books by this author

Stephen Michael King has always drawn pictures. At primary school he was a misfit - quiet, solitary, escaping into the world of his imagination, isolated by a hearing problem that went undiagnosed for many years. Now he has found his place as a popular picture-book illustrator, with books translated into many languages.