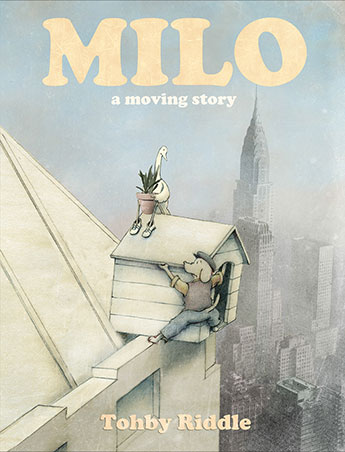 A sweet and funny story about a city-dwelling dog, a day when everything goes wrong, a curious rescue and a surprising gift.

Milo's life is almost entirely unremarkable. He lives in a solid kennel in an okay part of town. Every other day he has a job delivering parcels.

Then Milo's life is turned upside down by an argument with his friend Snombo, followed by a strange wild storm that leaves him and his kennel in a precarious place.

So begins Milo's surprisingly remarkable journey back to his friends.

A warm and whimsical adventure by the acclaimed creator of My Uncle's Donkey and Nobody Owns the Moon.
More books by this author

Originally trained in art and architecture, Tohby Riddle is a writer and illustrator based in Katoomba, NSW. He has created numerous award-winning picture books, two cartoon collections and a novel, and is the illustrator of the multi-award-winning Word Spy books on the English language. Recent books include the ambitious 128-page picture book Unforgotten, which has been published in five languages and The Greatest Gatsby: A Visual Book of Grammar. Tohby has won awards for both literature and book-design and has presented talks and workshops across Australia and overseas. Tohby loves words, images and combining the two to capture all kinds of ideas in his books.

For a dog, Milo’s life is quite ordinary. He lives in his kennel in “an okay part of town”, spending his days delivering parcels and enjoying the company of his friends like Cluffy and Snombo. He has few complaints until one night he has a strange dream that leaves him quite out of sorts. He argues with Snombo who is starting to write and quote “really lofty poetry” and there are some strange signs during the day that confuse him like a large rabble of moths fluttering by and even a scarecrow tumbling over and over. As the wind picks up, Milo seeks shelter in his kennel until that too, is picked up… and his adventures begin, especially after he meets Carlos, a curios sneakers-wearing migratory bird.

With its muted, almost monochromatic, palette adding to the atmosphere of ordinariness of Milo’s life and then his response to his argument with Snombo, Tohby Riddle has created another gentle but deep tale about friendship and falling out. The power of having a group of friends and the importance of apologising sits in stark contrast with the setting of New York, a city which conjures up an image of millions of anonymous people, and readers will appreciate the quirky way that Milo learns his lesson. Riddle says that the story grew after being ill for weeks drifting in and out of sleep around characters who’d been “in his notebooks for years” and an image from a Goya painting. There is certainly a “Wizard of Oz” feel to the big wind blowing Milo away – did he really meet Carlos and the helpful window cleaners or was it all a dream because he was so upset after his argument with Snombo?
An enigma… that is moving in both senses of the word.
Barbara Braxton, Teacher Librarian, NSW

Once again, Tohby Riddle has produced a delightful, thought-provoking picture book, which will appeal to children of all ages. Milo the dog lives a fairly ordinary life in the city until one day he has an argument with his best friend. A wild storm sweeps his kennel up and deposits it on the ledge of a very tall building. Milo has an adventurous journey back to his home, helped by a new friend he makes along the way.

Tohby Riddle has a knack of writing whimsical books with themes everyone can identify with, in this case friendship and in particular, tolerating a friend with annoying habits, regret after hurting that friend’s feelings, and ultimately finding a way to reconnect.

Tohby’s lovely muted, almost sepia, illustrations of his characters sit against a backdrop of photographs of New York’s skyscrapers. This could of course be used as a classroom reader, prompting discussions about friendship, tolerance and being brave, or as the starting point for a series of mixed-media art classes. Students in grades 3/4 or 5/6 could discuss the way Tohby creates mood with his use of colour, analyse why the characters are hand-drawn and the background is photographed, and finally recreate their own cityscape, which they can populate with Milo and his friends.
Anthea Barrett, Primary Teacher, DECV, VIC

The plot of this story takes off when the central character has a bad night’s sleep which leaves him feeling “cranky and unsettled”. He then goes on to do a series of unfair actions and upsets his friends. The author shows us what Milo is feeling as he yells at his friends, in the heat of the moment he almost enjoys the cruel things he is saying. After he cools down of course he feels sad about what he has done but things are not fixed quickly because another crisis happens. This book would be a good lead in to a classroom discussion about friendship and feelings. It would enable children to discuss when they feel angry and unsettled, when in the words of Milo they have “bull ants” in their heads. Children could use Milo’s fight with his friends to talk about other ways to handle conflict than yelling.

The book has lots of text features that could be talked about in the classroom, the author plays with font style and size to emphasise points, like the yelling and alters the way text looks between pages incorporating things like speech and thought bubbles. There are also references to other texts and movies which students may need support understanding but which would be a useful lead into the text to text reading comprehension strategy.

The artwork in Milo is different to many picture books children would have come across, being in muted, almost faded, looking colours. The characters are often surrounded by large white spaces with their shadows projecting into the space. This too could be a discussion starter, why has the artist done this?
This book would probably be enjoyed by younger students but I would use it with middle primary students because I think they would gain more from looking at the subtle references to other texts as well as the way the author talks about conflict.
Wendy Fletcher, Bellerive Primary School, TAS

Tohby Riddle always seems to write something a little different each time. I can sometimes get a little lost by some of his story lines though. This book contains themes of friendship, our ability to cope if things change. Teaching children coping mechanisms is a huge issue with a lot of children at the moment.

Sometimes we say hurtful things to people who we love and later regret these actions, well Milo regrets talking to Snombo the way he does in the book. There seems to be a very deep and meaningful subtext in this book. Are the dreams which Milo is having contain a deeper subconscious meaning? The first dream left him feeling uncertain of his feelings and the second dream seems to reflect he has a calmer disposition in his life now. This book can just be read in its simpler form or it can be analysed deeper with older children.

A mixture of pencil drawings and realist picture backgrounds with lots of sombre colours included make this a beautiful book to be used within art in the classroom. Tohby’s books are often quirky and this one looks into our deeper emotions but this story is a good book to have in any school library.
Felecia Phillips, Tasmanian eSchool, TAS