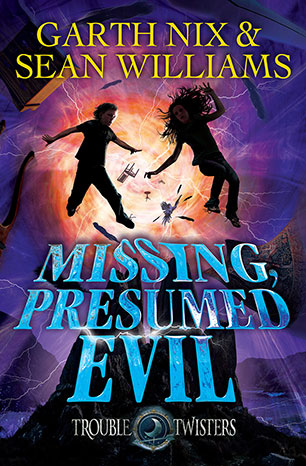 Magical twins, mystery and danger, unexplained events, and an Evil that refuses to be contained . Book four in the gripping series from fantasy masters Garth Nix and Sean Williams.

Trouble is looming over the quiet coastal town of Portland. A door to the Evil Dimension has been opened, and twins Jack and Jaide are about to face their greatest challenge yet.

Jack and Jaide Shield finally learn what it means to be a warden-in-training as they pit their wits and gifts against mysterious fellow troubletwister Stefano Battaglia. The competition gets serious when Grandma X discovers her twin sister, Lottie, is stranded in the Evil Dimension - and she could be trapped there forever. Can Jack and Jaide find Lottie, defeat The Evil and get everyone safely home?

Sean Williams is best known for his award-winning space opera series and is the number-one New York Times-best-selling author of Star Wars: The Force Unleashed. He is also the author of the Twinmaker series for young adults and the Books of the Change. Sean lives in Adelaide with his wife and family.