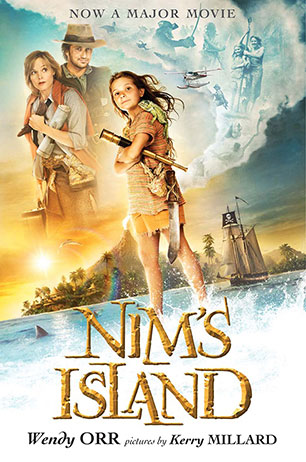 An irresistible adventure fantasy about Nim - a young girl alone on a tropical island except for her three amazing friends: an iguana, a sea-lion and a turtle. When a hurricane strikes, Nim becomes a hero in a single-handed sea rescue. Now a major feature film starring Jodie Foster, Abigail Breslin ('Little Miss Sunshine') and Gerard Butler ('300').

Nim lives on an island in the middle of the wide blue sea with her father, Jack, a marine iguana called Fred, a sea lion called Selkie, a turtle called Chica and a satellite dish for her email. No one else in the world lives quite like Nim, and she wouldn't swap places with anyone.

But when Jack disappears in his sailing boat, and disaster threatens her home, Nim must be braver than she's ever been before. And she needs help from her friends, old and new.

Come aboard Nim's next adventure, Nim at Sea - a dangerous rescue mission to save Selkie and bring back her friend Alex Rover.
More books by this author More books in this series